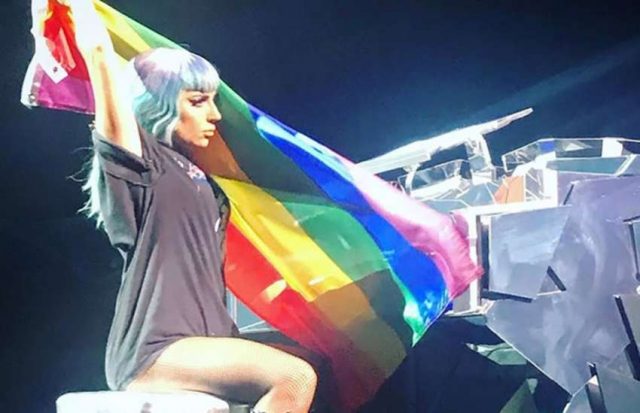 Lady Gaga has used the most recent shows during her Las Vegas residency to celebrate Pride month and the LGBTI community.

The bisexual Grammy, Oscar and Golden Globe winner is currently performing her stadium show Enigma in Las Vegas. Gaga is also performing a more stripped back, intimate show called the.

At the start of her beloved single Born This Way, Gaga told the crowd she wanted Pride to last all year.

‘It’s Pride Month, but in my mind, it’s Pride all fucking year,’ she told the crowd.

‘Let’s celebrate all sexual identities, every religion, every colour, every kind. Let’s go! Celebrate your freedom!’

Gaga has long been an outspoken ally for LGBTI communities and Born This Way is often considered an anthem for them.

Later in the same Enigma show, Gaga wrapped herself in a rainbow Pride flag while performing her Oscar-winning song, Shallow. The song comes from the acclaimed film, A Star Is Born.

The 33-year-old voiced her support again during an acoustic version of Born This Way during one of four of her Lady Gaga Jazz and Piano Shows.

‘In the spirit of Pride Month, which I declare as Pride Year, let us release ourselves from all that binds us and celebrate all sexual identities,’ she said.

Gaga then asked the crowd: ‘What is your pronoun?’