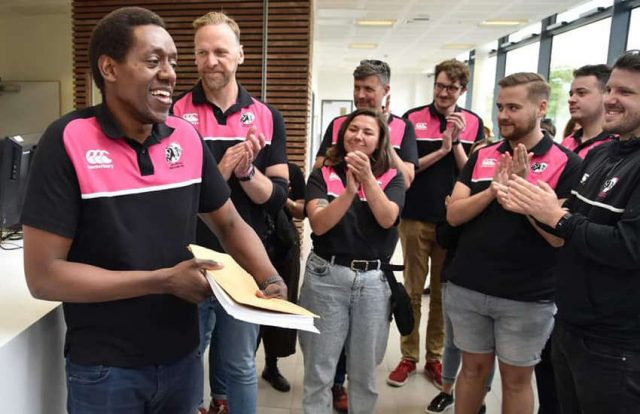 A gay rugby player living in Bristol had a last-minute reprieve from detention when he reported to a police station on Thursday (6 June).

, a 39-year-old from Kenya who has lived in the UK for the last nine years, however, still faces deportation to Kenya.

Under Section 162 of the penal code, homosexual behavior is punishable by 14 years’ imprisonment. The Kenyan constitution out-rightly bans marriage equality.

As an outwardly gay man, Macharia fears persecution and violence should he be deported.

More than 150,000 people have signed a petition urging the Home Secretary to let Macharia stay in the UK.

And, supporters have raised more than US$12,000 for his legal fees.

Dozens of supporters, led by , joined him as he attended Bridgewater police station.

They wore the LGBTI-inclusive club’s distinctive pink and black kit. They blasted Gloria Gaynor’s I Am What I Am from speakers.

‘This is a small victory but we must continue the fight’ the rugvy team wrote on Facebook.

‘We will not rest until Ken is safe and granted asylum here, at his home, where he belongs.’

Maccharia he was ‘relieved and happy’.

‘But I don’t have permission to stay in the UK and my position is very precarious’ he added.

Macharia, a mechanical design engineer, first claimed asylum in May 2016, having arrived in the UK on a student visa in 2009.
In November 2018, authorities detained him.

The Home Office decided to reinstate his deportation notice and actively opposed bail.

It appeared that pressure from a 100,000-strong petition proved powerful; the courts granted him bail, and his freedom.

In a letter to his solicitor, the government acknowledged that gay sex in Kenya was punishable by years in prison. It also said LGBTI Kenyans faced violence and intimidation.

However, it said ‘objective evidence does not establish that LGBT persons are likely to be subjected to persecution or serious harm.’

The government refused 23 applications between July 2015 and April 2017. The Home Office was still considering two.