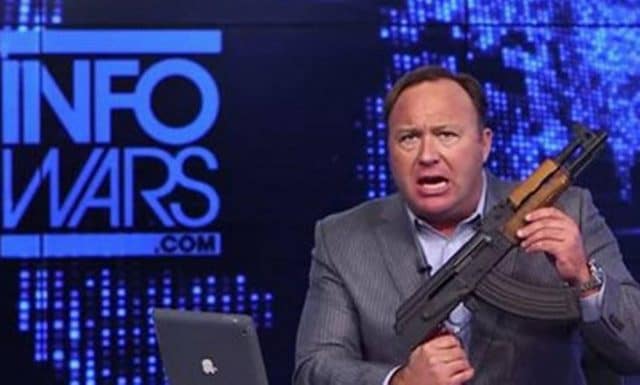 Lawyers representing families of Sandy Hook shooting victims said in a new court filing that Infowars founder Alex Jones sent them child pornography in electronic files turned over them as part of a lawsuit against him, according to The Connecticut Post.

The law firm Koskoff, Koskoff and Bieder said it made the shocking discovery after Jones turned over the files in response to the families’ defamation lawsuit against him for previously claiming the 2012 Sandy Hook Elementary School shooting, in which 26 people died, was a “hoax.”

The phrasing plaintiffs use in the Alex Jones case: “The FBI advised counsel that its review located numerous additional illegal images, which had
apparently been sent to Infowars email addresses.”

FBI’s job is now to ascertain whether Jones knowingly possessed the images. pic.twitter.com/FG7dh9pbaG

Jones vehemently denied the accusation on Monday, saying on his InfoWars show that lawyer Chris Mattei was trying to frame him.

Even when talking about something serious like how he was set up with CP in his emails #AlexJones can’t help but be a meme
YOU JUST CAN’T STOP THE MEME pic.twitter.com/DWUrWVn8mU

Mattei and his law firm said they are treating Jones’s remarks as threats against them.

“Mr. Jones was upset, he did not threaten Mr. Mattei,” said Norman Pattis, Jones’s lawyer. “He spoke in a compassionate fashion.”

In an email to The Hill, Jones said that he spoke to federal prosecutors last week and that there is “no indication anyone at InfoWars knowingly possessed child pornography.”

Lawyers for the Sandy Hook families have asked a Connecticut court to take immediate action on the new allegation.

A court hearing focused on the new documents is scheduled for Tuesday, the Post reported.