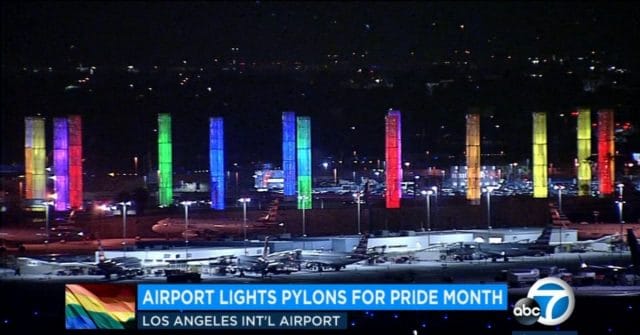 LAX officials say they are proud to join Mayor Eric Garcetti in his celebration of Pride Month and that everyone is welcome in the airport and in Los Angeles in general, according to Eye Witness News.

Garcetti said in an open letter for Los Angeles Blade: “Pride is one of our City’s largest events, bringing people together from across LA County and beyond to celebrate the heritage and culture of our LGBTQ+ community and its allies.

“We unite to reaffirm our determination, our dedication, and our resolve. We lift up our voices and ensure we will never be silenced.”

Garcetti continued: “Hate has no place in Los Angeles, and we must take that message to every city across America. We will not tell Angelenos to be patient, or to wait for the respect and the rights that they deserve.

“We are proud of every lesbian, gay, trans, bi, queer, intersex, asexual person, and ally who calls L.A. home.”

Other cities across the US are also displaying rainbows for Pride month’s 50th anniversary. The anniversary marks 50 years since the Stonewall riots which began in New York.

The riots were “a pivotal moment that helped ignite the LGBTQ+ rights movement across the country and around the world,” said Garcetti.

The annual Los Angeles Pride parade, which attracts more than 400,000 people every year, will take place on Sunday, June 9.

In addition to Los Angeles, Chicago has painted roads with rainbow striped crossings, along with blue, pink and white versions to represent the transgender flag.

And American brands like Ralph Lauren are releasing rainbow products.