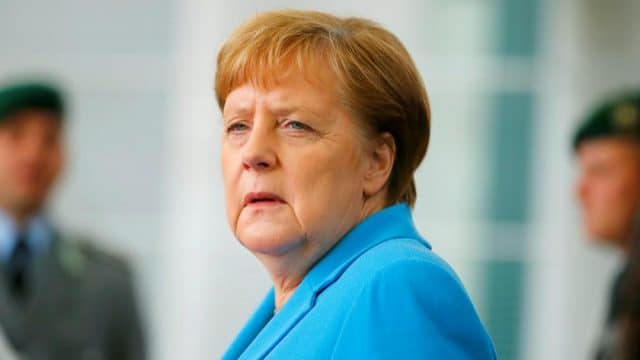 Three public shaking bouts in under a month have sparked genuine concern for the health and well-being of German Chancellor Angela Merkel, despite her team’s insistence that she “is fine”.

But with this concern also comes a media frenzy — the 360° video, zoomed in or zoomed out; the widespread analysis and speculation on a cause; the need to lip-read private words or second guess thoughts — all on the world’s most powerful woman, who is potentially, or not, in a vulnerable place.

It deepened further on Thursday when the 64-year-old broke with tradition and chose to be seated during a welcoming ceremony in Berlin for Danish Prime Minister Mette Frederiksen.

Later addressing the disquiet, Merkel insisted all was okay and that she believed the trembling could, in part, be due to something psychological.

“I believe [the shaking bouts] will someday pass, but they have not yet,” she said.

Her reassurances, however, do not seem to have lessened the media focus, with German and international publications looking to physicians and psychologists for expert insight that can fill the gaps.

Professional lip-reader Julia Probst said she had refused a number of requests from outlets to decipher the words Merkel appeared to mutter to herself during a recent incident.

“I do not think its funny and I do not understand why it should be relevant for the media,” she wrote in a statement.

“I would like the media to ask themselves this question: ‘Assuming that I, myself, was in the same situation, would I want that to be reported on me this way?'”

For a woman known for her robust work ethic, her usual flair for public appearances, and her resilience, an apparent sign of “weakness” in Merkel could be considered worrisome.

But this begs the question of whether the German chancellor has a responsibility to divulge any illnesses (if she has them), or whether the media overplays the public interest card for potential page views.

Euronews has covered the shaking incidents on a number of occasions and in various languages but we can still pose the question regarding editorial choices even though such accusations can be levelled at ourselves.

Do we have a right to know a leader’s medical history?

There are no shortage of leaders from all over the world that have hidden illnesses from their electorate.

France’s longest-serving president Francois Mitterrand was diagnosed with prostate cancer the year he was elected, but went to great lengths to keep the illness secret.

Ironically, he had previously vowed to be transparent about his health following the death of a previous president, Georges Pompidou, while in office.

Winston Churchill, the wartime prime minister in the United Kingdom, suffered with a number of strokes in his later years in office that were not initially disclosed.

He eventually retired from his position, although he remained in politics for several years afterwards.

The former leader of the Soviet Union Joseph Stalin is believed to have suffered with cerebral atherosclerosis, a brain disease that could have impaired his decision-making abilities.

A memoir from doctor Alexander Myasnikov said he found the disease had resulted in the leaders’ “cruelty and paranoia, his fear of enemies, his losing the ability to soberly assess people and events, as well as his extreme stubbornness”.

But must the distinction need be made between knowing about an ailment for the sake of the knowledge, or being aware of an illness that could impede a leader’s ability to carry out his or her job?

An article in current affairs magazine Slate argued that the examination of a leader’s medical records were “unlikely to give us a clear answer about whether a president will survive his or her term; it is, however, likely to be used as political weaponry to unfairly attack candidates.”

It had focused on the 2016 US campaign trail between Donald Trump and Hillary Clinton, where Clinton was famously filmed collapsing outside of a 9/11 memorial event.

After a similar media frenzy, the Democrat nominee revealed she was suffering with pneumonia and “didn’t think it was going to be that big a deal.”

A Canadian thesis by journalist Catherine Lanthier suggested that politicians be required to disclose specific illnesses — if it impeded their ability to adequately conduct their work.

It quoted Andre Picard, the public health reporter for the Globe and Mail, as saying “degenerative diseases, dementia, things that can really impact the ability to work physically and mentally…severe depression” should be disclosed.

He added: “I think they should disclose it to get time off work, be treated and then come back, I think it should be part of our system.”

Radio Canada ombudsman Pierre Tourangeau said “incapacitating” illnesses or “something that prevents him [or her] from the exercise of his [or her] leadership” should be discussed, but also stressed the importance of distinguishing between that and other illnesses.

He said: “However, I really make a distinction between a cancer in the primary phase, I believe in that case there is no interest (to disclose it), in the same way as a prime minister using anti-depressors.”

“Those things do not prevent someone from functioning normally and affect his judgement.”

“Obviously, if he is at an advanced stage of cancer and thinks he will not survive much longer, it becomes of public interest.”

‘I am aware of my responsibility’

Merkel, who is not seeking re-election in 2021, has told reporters that she is “aware of the responsibility” of being in office.

She adds: “I behave appropriately as far as my health is concerned…also as a person, I have a major interest in being healthy and I look after my health.”

So if, and when, there is any evidence beyond repeated coverage of trembling incidents that suggests the German chancellor is no longer fit for the job, are we, the media, really focusing on a newsworthy question of ability, or tearing apart the private details of a woman who happens to be in public office?