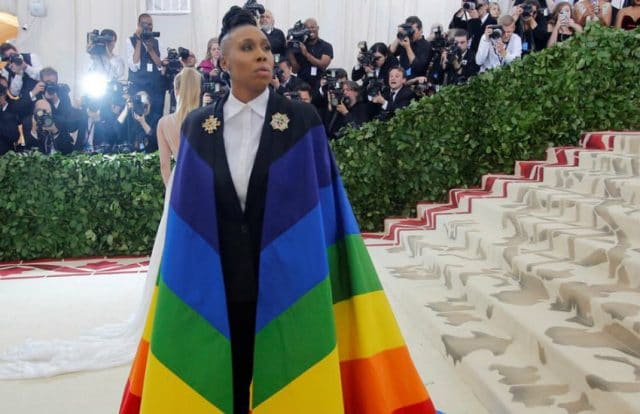 Lesbian writer Lena Waithe has opened up on the importance of Pride month.

Waithe made headlines in 2017 when she became the first black woman to win an Emmy for Comedy Writing.

This year, she has also partnered with New York LGBT Center to be a part of the Stonewall riots anniversary social media campaign.

Last week, she posted two videos for the campaign.

‘5 nights of riots, 5 decades of P R I D E. The fight ain’t fun but it’s very necessary,’ she wrote in the caption.

‘To me, Pride month is almost like Black History Month,’ she said in an interview with .

‘I don’t necessarily need a month to celebrate these things that make me who I am, but I am grateful that it brings awareness to the world at large about queer people.’

Waithe then made an important point about inclusivity at Pride.

‘A big thing for me, is making sure we’re embracing everyone in the queer community,’ she added.

‘I think it’s easy to say Lesbian, Gay, Trans, Bi but there is also the intersex community, the asexual community, the non-binary community that I feel is often forgotten about or is gender queer as well, so to me, when people are embracing the queer community, I want them to make sure they are embracing everyone.’

Waithe is famous for her Met Gala outspoken outfits. She turned heads with her now iconic rainbow cape in 2018.

‘We go through multiple fittings. There are a lot of emails back and forth, so it’s definitely a collaboration,’ she said.

‘But it really starts in their brain, like the first year was Carolina Herrera and they were doing capes. There is a nice synergy there from the Emmy speech. So they had the idea of the capes and different colors and then I said, well, what if it was a rainbow cape? and they were like OK, cool.’

Last May, she wore a custom Pyer Moss zoot suit with a message on the back: ‘Black drag queens inventend camp.’

‘This year, I was with Pyer Moss and it was a phenomenal effort. The designer Kerby Jean-Raymond, he had the sketches of us wearing the same suit, and I was like oh, that’s amazing. It was his idea for the pinstripes to be lyrics,’ she said.

She furthermore added: ‘I pitched him and I was like what if we do messages on the back. The first thing that came to my mind was “Black Drag Queens Invented Camp” and he was like oh, I like that.’

‘So, it was just he and I texting back and forth. What I love most about it, is that collaboration, the ideas flowing, and just really creating a vibe. My style obviously is the liaison.’