Home Gay Life Lesbian Couple Says They Were Brutally Attacked After Refusing To Kiss For... 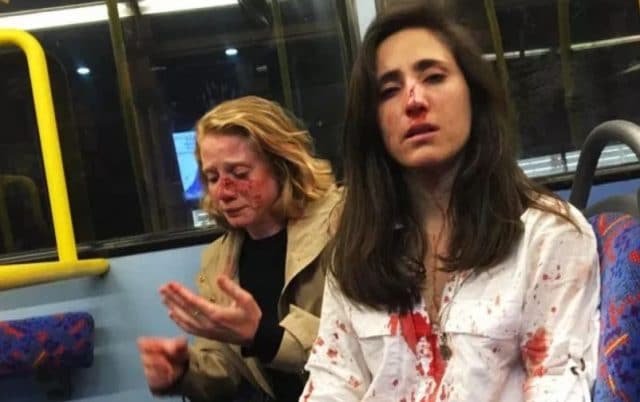 A Ryanair flight attendant and her girlfriend say a group of four men beat and robbed them on a London bus while making “lewd and homophobic comments,” after the lesbian couple refused to kiss at the men’s request.

Melania Geymonat, 28, and her American girlfriend, Chris, were on their way home at about 2:30 a.m. on May 30 after spending the night out, the couple told Business Insider.

When the group of four men sitting behind the couple on the top deck of the bus discovered that the women were a couple, they insisted that they kiss.

When the couple refused, Geymonat said the men attacked them and made “crude sexual gestures,” Business Insider reports.

London Metropolitan Police confirmed the incident had been reported in a Friday news release.

“Four males who began to make lewd and homophobic comments to them. The women were then attacked and punched several times before the males ran off the bus. A phone and bag were stolen during the assault,” the statement reads.

The couple was rushed to the hospital for “treatment to facial injuries,” according to the release.

A Twitter account reportedly belonging to Geymonat shared an article about the incident, attaching hashtags including #MeToo and #LGBTQ.