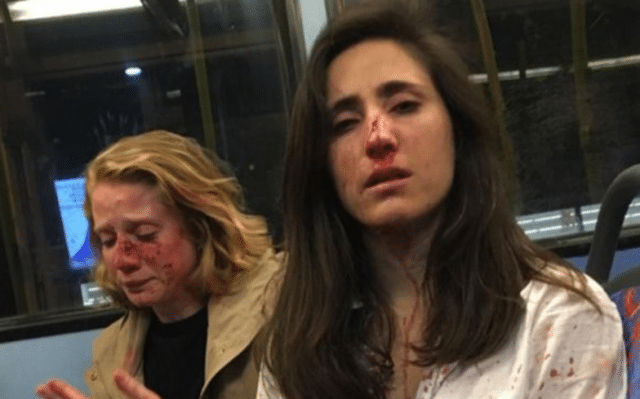 Melania Geymonat, a 28-year-old Ryanair flight attendant from Uruguay, was en route to Camden town on a bus with a woman called Chris when they were approached by a group of four homophobic men.

After harassing them with anti-gay slurs, they demanded they kiss each other in front of them for their own entertainment. When they refused, all men assaulted and robbed them.

Writing on Facebook, alongside a picture with their bodies covered in blood, Geymonat described how the men targeted them: “They started behaving like hooligans, demanding that we kissed so they could enjoy watching, calling us ‘lesbians’ and describing sexual positions.

Geymonat has been off work ever since, and is still waiting to hear whether her nose has been broken.

“What upsets me the most is that VIOLENCE HAS BECOME A COMMON THING, that sometimes it’s necessary to see a woman bleeding after having been punched to feel some kind of impact,” she added.

“I’m tired of being taken as a SEXUAL OBJECT, of finding out that these situations are usual, of gay friends who were beaten up JUST BECAUSE. We have to endure verbal harassment AND CHAUVINIST, MISOGYNISTIC AND HOMOPHOBIC VIOLENCE because when you stand up for yourself shit like this happens.

“By the way, I am thankful to all the women and men in my life that understand that HAVING BALLS MEANS SOMETHING COMPLETELY DIFFERENT. I just hope that in June, Pride Month, stuff like this can be spoken out loudly so they STOP HAPPENING!”

The Metropolitan Police have confirmed they are investigating the attack.

For those who don’t understand why we still need Pride – did you read the above? Are straight people being attacked for being straight? We recently rounded up nine reasons as to why we need ‘Straight Pride’ – read here.

Related: Chris Evans had the perfect response to people calling for ‘Straight Pride’.

Related: Disneyland just made history with their first ever Pride parade.

Related: Right-wing bigots are trying to hold their own ‘Straight Pride’ in Boston.