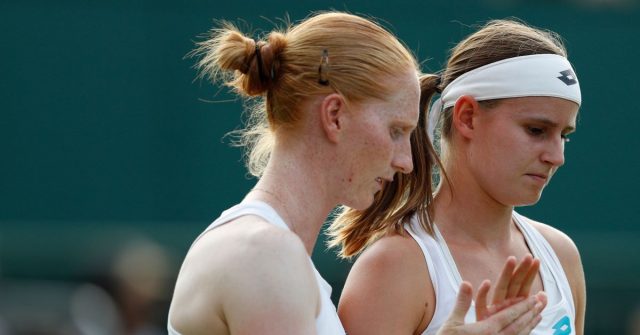 After a whirlwind Wimbledon fortnight that spotlighted the doubles matches this year, when former world no. 1s Serena Williams and Andy Murray teamed up, one Belgian duo also stood out from the crowd.

Alison van Uytvanck, who came out last March, made history this year with her girlfriend and tennis partner Greet Minnen as the first same-sex couple to play doubles at Wimbledon together.

Couple goals playing for the first time together in a grandslam! Enjoyed every second of it! ❤️ you @greetjeminnen

Van Uytvanck and Minnen defeated Katie Swann and Freya Christie in their first match before losing in the second round to Chan Hao-ching and Latisha Chan.

In an interview with The Guardian after their winning Wimbledon debut, Van Uytvanck also spoke out on behalf of closeted gay men in tennis, saying: “We [would like to] see more people coming forward and saying ‘It’s OK.’ I think people would have more confidence. That would be something good, men would appreciate that. More people would come out – it would help to make it easier.”

“Women are coming out more easily than men. I hope we are something that people can look up to, like a role model to come out. There must be some gay men [actively playing] out there. For me personally, [if I were] a man, it would be more difficult to come out.”

Their voices add to a supportive community of other players like Kevin Anderson in acknowledging the reality of how there isn’t a precedent for out gay or bisexual men competing in professional tennis, and how important it is to create a culture on tour that would make an ATP player feel safe to come out in the future.