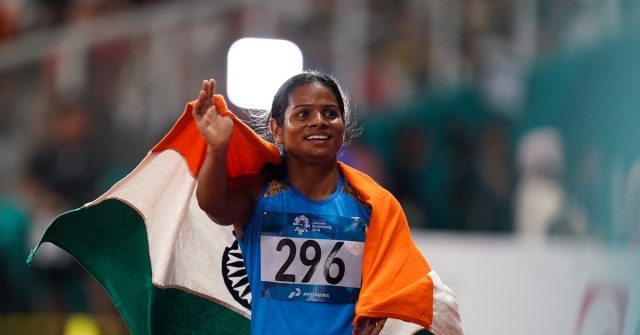 Dutee Chand — one of India’s first out gay athletes and “the fastest woman in India” — made history on Tuesday by winning her country’s first-ever gold medal at the 30th Summer World University Games in Naples, Italy. She ran the women’s 100-meter sprint in 11.32 seconds.

The World University Games are the biggest international multi-sport event besides the Olympics.

In a tweet celebrating her victory, Chand wrote, “Pull me down, I will come back stronger!” It was a likely reference to a prior dispute over her high testosterone level which briefly got her banned from competition.

In the tweet below, you can view the race and Chand celebrating afterwards by hoisting India’s national flag.

Congratulations @DuteeChand for winning a hard earned and well deserved Gold in the Women’s 100 m finals.

In summer of 2015, Chand fought and won the right to compete despite attempts to ban her in 2014 for having high testosterone levels. Months after winning her right to compete, she won three golds at India’s national championships.

In July 2017, she threatened to sue former Indian Olympic sprinter Rachita Panda Mistry after Mistry allegedly called her “transgender.” While Chand is not trans, some think that her hyperandrogenism might hint at her possibly being intersex, though she hasn’t confirmed this.

The now-23-year-old runner placed 50th in the 2016 Summer Olympics and in doing so revealed the hypocrisy of those who call for gender testing of athletes as no one clamored to know the hormone levels of the 49 women who beat her.

Chand came out in a May 2019 press interview when she declared her love for another woman. She said the Indian Supreme Court’s historic 2018 decision to decriminalize gay sex encouraged her to speak publicly about her sexuality, although she also said that her sister disapproves of her relationship.

Chand tells her story in the current issue of the India edition of Cosmopolitan, which features her on the cover.