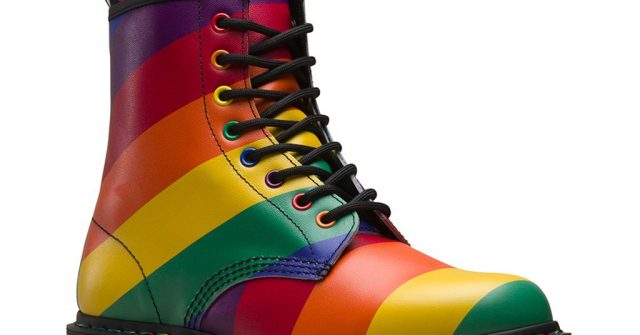 Here we are, ten days away from the kickoff of World Pride in New York City, with Pride Month more than halfway done, and you’re still shopping for Pride gear? No worries, honey, Outsports got you.

Let’s do this in alphabetical order, starting with Adidas.

The Adidas Pride Collection for 2019 has 163 products to choose from, shoes to slides to shorts and pants and hoodies and hats and backpacks and thigh-high socks. And more. There are trefoil-emblazoned apparel for men, women and kids, and every color in the rainbow, plus glitter. 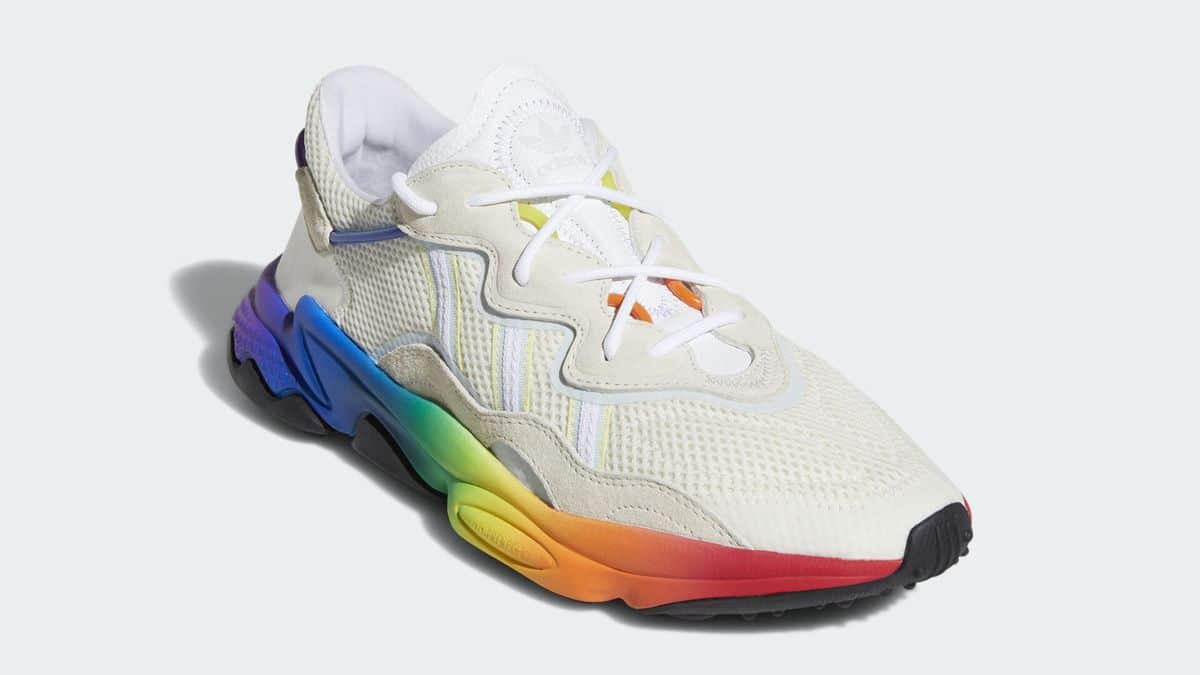 There are 98 items under $50, with most items in the $50-$100 range, and just a few that cost more than $100. Sneaker wearers who long for the 1990s will want to snag a pair of updated Ozweego running shoes starting at $110. Read more about the Ozweego in Footwear News, which reports Adidas is supporting The Trevor Project, the world’s largest suicide prevention and crisis intervention organization for youth of the community. Its contributions are not connected with sales, according to the report.

Only one Adidas item in the Pride collection sells for more than $150 — the Adidas Ultraboost 19 Pride shoes, yours for $180 (Shipping and taxes extra). 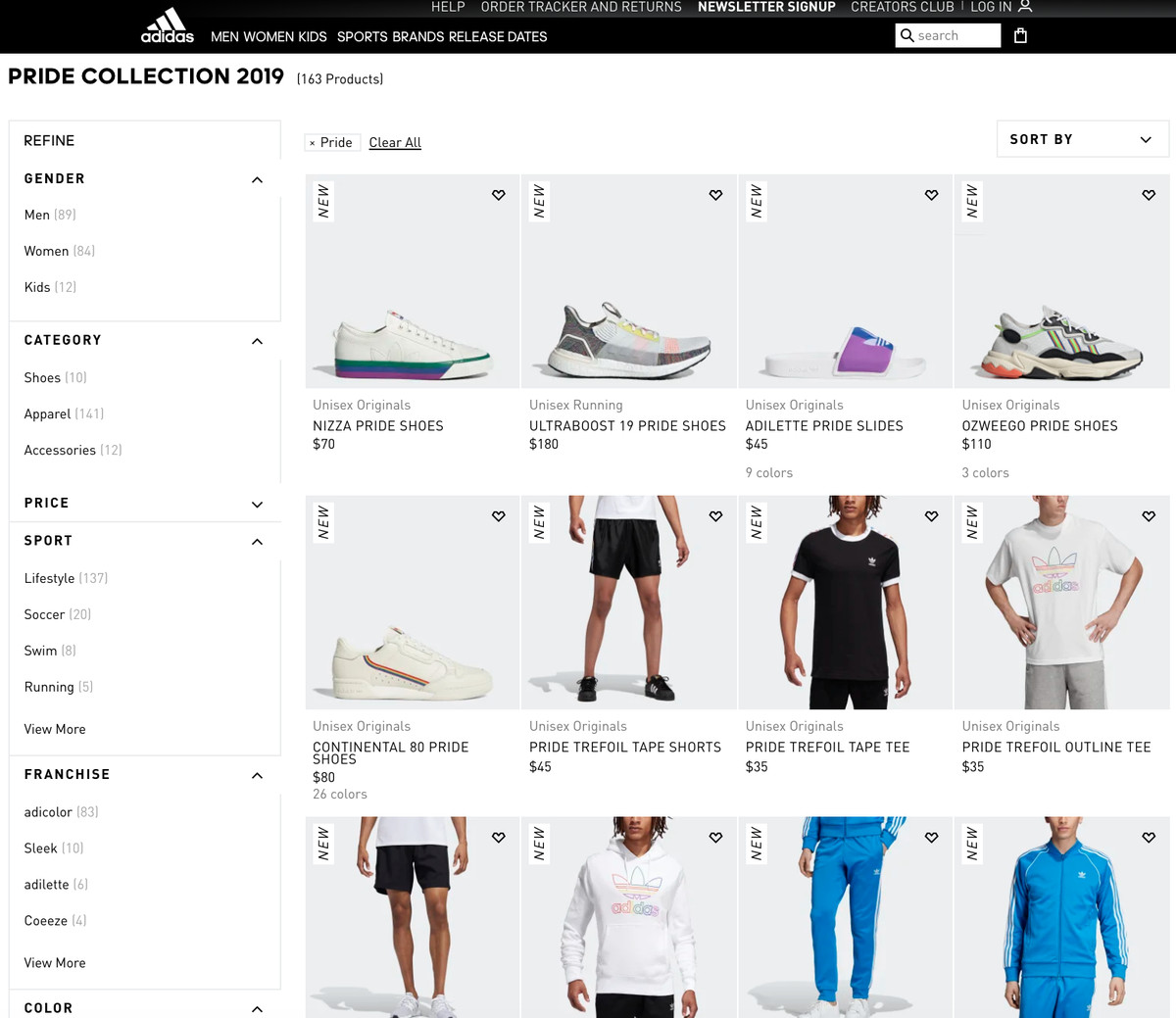 Bombas has created limited-edition Pride socks in ankle and calf styles, made with a special space dye technique done in a rainbow palette. Both styles retail for $12 a pair; a 4-pack containing two of each style is on sale for $45.60 on Bombas.com. The company will donate 40% of its donation socks — up to 1 million pairs — to homeless LGBTQ youths in partnership with the Ally Coalition.

Brooks has created a limited-edition Run Proud collection, featuring apparel and accessories with designs celebrating Pride, expression and inclusivity. The collection ranges from $16 to $24 and is currently available on Brooksrunning.com. Brooks’ partnership with and donations to International Front Runners will support the growth and success of these LGBTQ-inclusive clubs around the world.

Converse is not only offering a Design-Your-Own custom edition of its legendary Chuck Taylor hi-tops and low-top sneakers, it’s making financial contributions to LGBTQ nonprofits like the It Gets Better project, OUT Metrowest, Fenway Health in Boston and Point of Pride in Oregon. 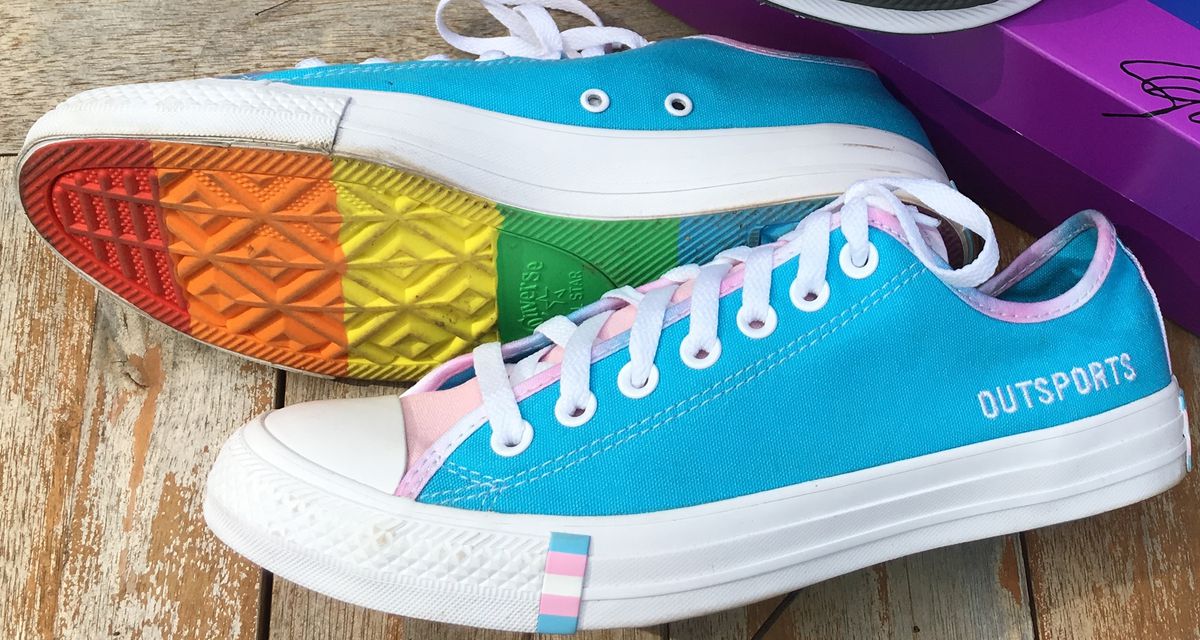 I was so enamored of the design possibilities first tweeted by journalist and transgender pioneer Gwen Smith, I ordered my own personal creation, with the word “Outsports” stitched on their sides. They were made in Vietnam and arrived too late for Outsports Pride and L.A. Pride but I plan to wear them proudly at World Pride in NYC.

Former Navy SEAL Kristin Beck is a spokesmodel for Converse and tweeted that she ordered a shitload.

Here’s my pride collection for this year pic.twitter.com/WVDYtOgCrz

Prices for the custom sneakers are $80, and the most expensive item is $100. You can also order a Pride tee for $25. You’ll find something for men, women and children at the Converse online store. These prices don’t include shipping and tax.

Converse has been a subsidiary of Nike since 2003, and has given LGBTQ causes $1 million in financial support since 2014. Read more about customizing Chucks with the trans flag colors here. 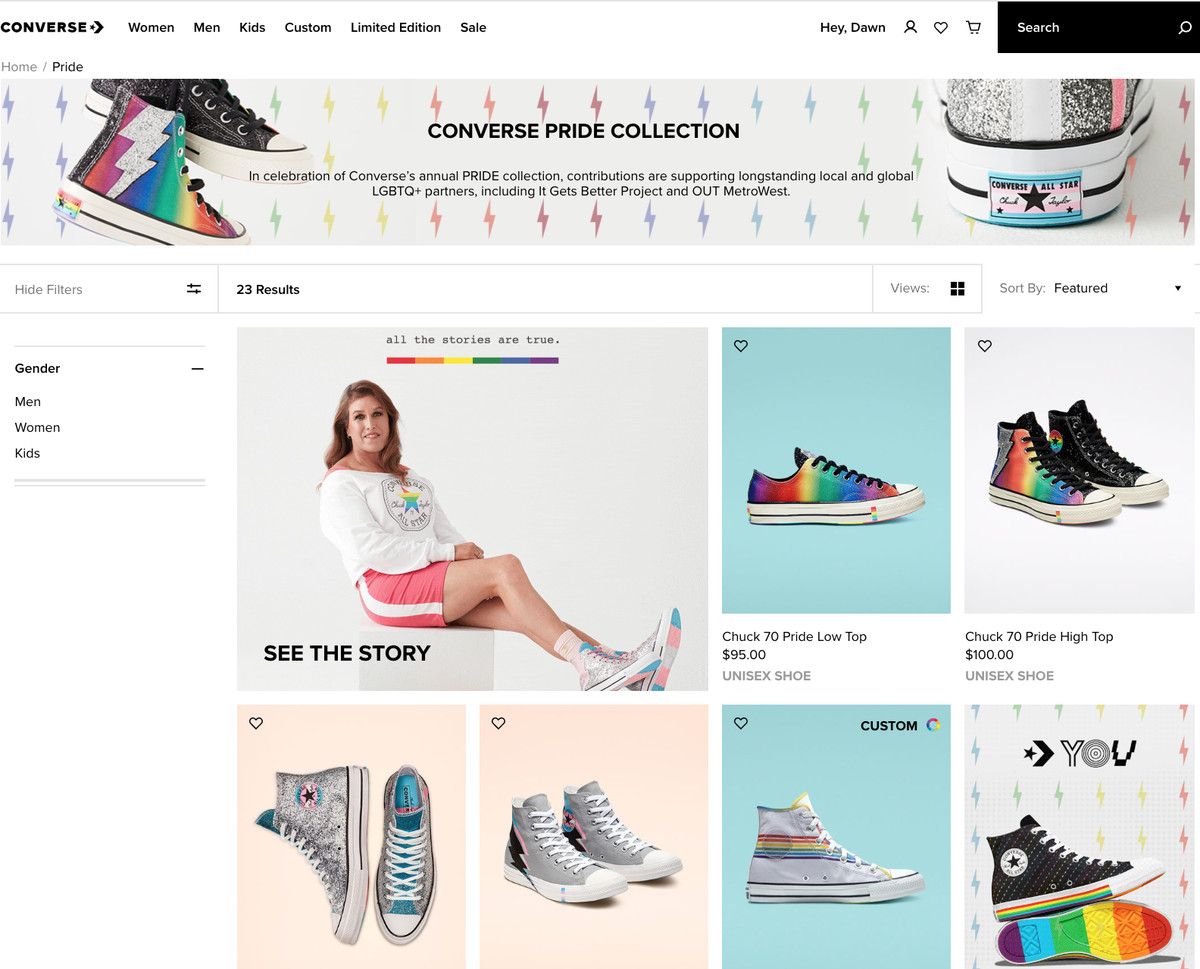 Check out Diesel’s Pride capsule collection, featuring more than 20 items, including tees, shorts, hats, visors, briefs, thongs, jock-straps and more at Diesel.com. The company is making donations to the Stonewall Inn Gives Back Initiative, a nonprofit organization that supports LGBTQ efforts around the world that promote tolerance and equality.

Dockers’ Pride 2019 collection adds a rainbow to the brand’s trademark anchor image on both a unisex t-shirt for $29.50 and a pullover hoodie for $59.50, available on Dockers.com. Dockers donates to the Stonewall Community Foundation, but doesn’t tie donations to sales. 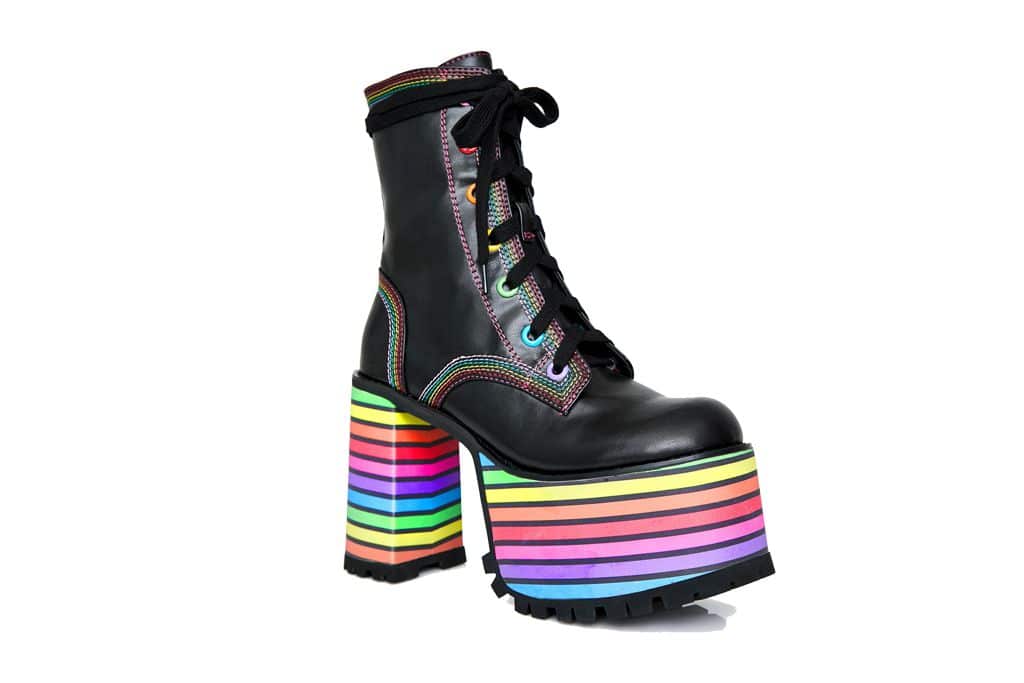 Never heard of Dolls Kill? They specialize in festival fashion and this month launched its first-ever pride collection. Club Exx features colorful tube tops, platform boots, rainbow-themed fanny packs and much more. Check out and you’ll find prices range from $8 to $165. A portion of the sale of every Pride product sold goes to support Lyric, a San Francisco-based center for LGBTQ youth.

Doc Martens has only one product but it’s a Pride reboot (sorry!) of its classic 1460 boot: rainbow flag colors appear everywhere, from the laces, heel-loop to the backstrap. It’s available on Drmartens.com for $145 and a portion of the proceeds will benefit The Trevor Project.

Among the shoes you’ll find in DSW’s Pride Collection are Betsey Johnson Verra sandals for $49.99. DSW is offering Pride gifts with any footwear purchases $10 water bottles and $5 rainbow laces, and 100% of proceeds for both items will go to Be Strong.

Gap has a wide-ranging collection of Pride apparel and 15% of all sales from gap.com through July 6 go to United Nations Foundation’s UN Free & Equal.

A company called Happy Socks is working with the Phluid Project, which calls itself the world’s first gender-free store. Their pride-themed sock collection features four styles, each costing $16. Ten percent of the proceeds go to support the Stonewall Community Foundation, Go to Thephluidproject.com.

H&M, a sponsor of World Pride, offers pool slides, socks, apparel and accessories with a Pride theme at hm.com. H&M is donating 10% of each sale to United Nations Foundation’s UN Free & Equal.

Kenneth Cole has been a longtime supporter of campaigns to fundraise and raise awareness of LGBTQ causes, from HIV/AIDS to marriage equality. This year you can get a Kam sneaker with a simple rainbow stripe for $120, the chunky Bailey jogger sneaker for $150 and sandal slides for $59.99, available on kennethcole.com. Kenneth Cole donated $40,000 to support United Nations Foundation’s UN Free & Equal.

Nike has formed a partnership with the Gilbert Baker Estate — the man credited with designing the Pride rainbow flag — and this month launched both an extensive Pride-inspired collection of athletic wear and a new ”Be True” video campaign, featuring LGBTQ athletes.

Among the prominent stars of the campaign is trans athlete Chris Mosier, who appears shirtless — just like any man might.

I cannot think of a better way to celebrate 9 years on T today than having the #betrue campaign launch. Thank you @Nike for celebrating me as an athlete & transathlete, and for empowering athletes across the world to be unapologetic about who they are. #UntilWeAllWin pic.twitter.com/awB97QPZtL

Nike’s design for 2019 includes the classic swoosh symbol and Baker’s original 8-color flag. Pink and turquoise were dropped at the last minute in 1979, when flagmakers ran out of pink, and Baker stripped turquoise from his design to keep the stripes to an even six. 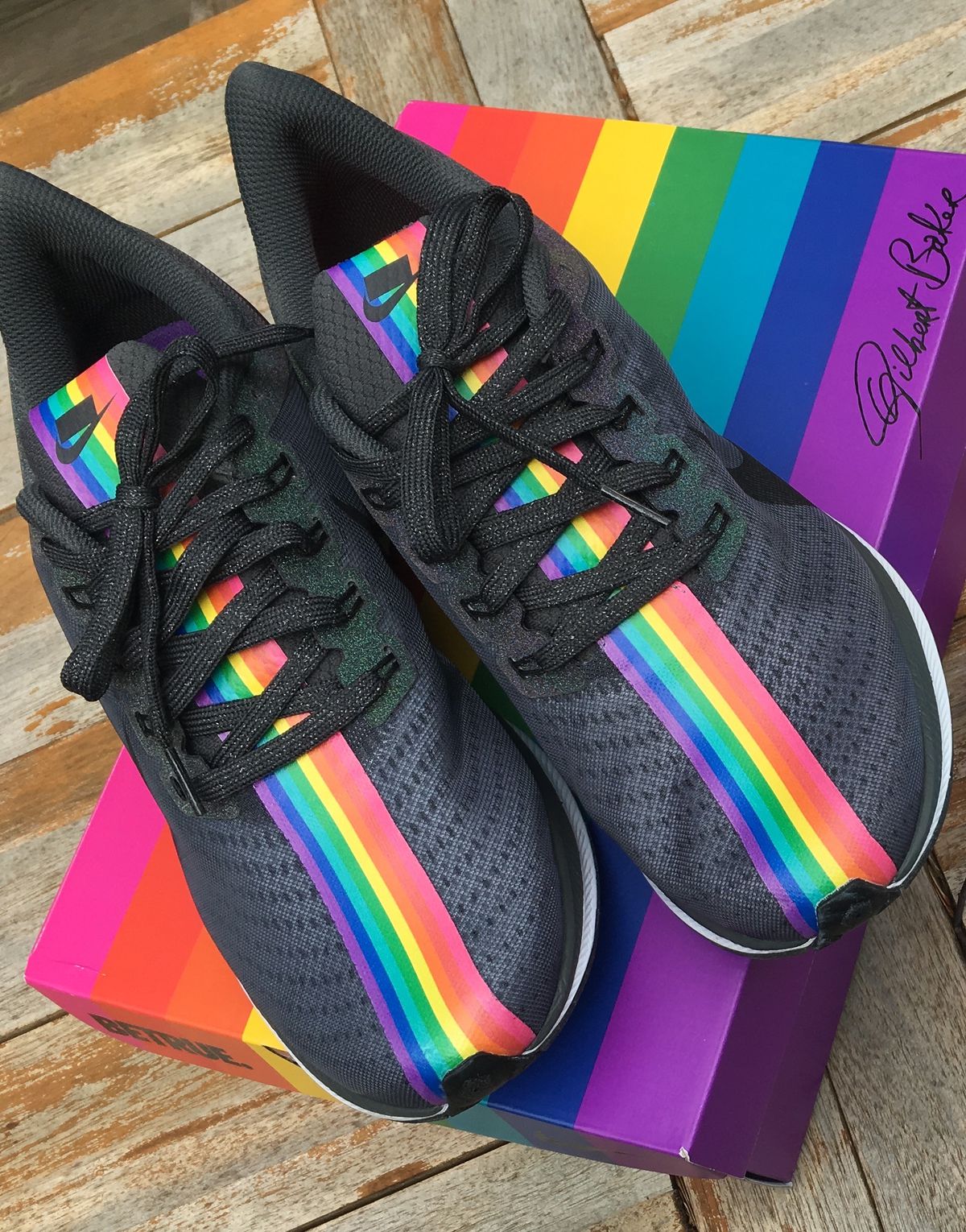 Nike’s Be True collection of apparel ranges from socks starting at $18 to hats for $28, all the way up to the $180 Nike Zoom Pegasus Turbo Be True running shoe (shipping and taxes not included). Each pair comes in a rainbow-colored shoebox emblazoned with Baker’s signature.

Nike is a huge contributor to LGBTQ causes, offering grants and financial support to more than 20 organizations totaling $3.6 million since 2012. Read more about Nike’s Be True Collection here. 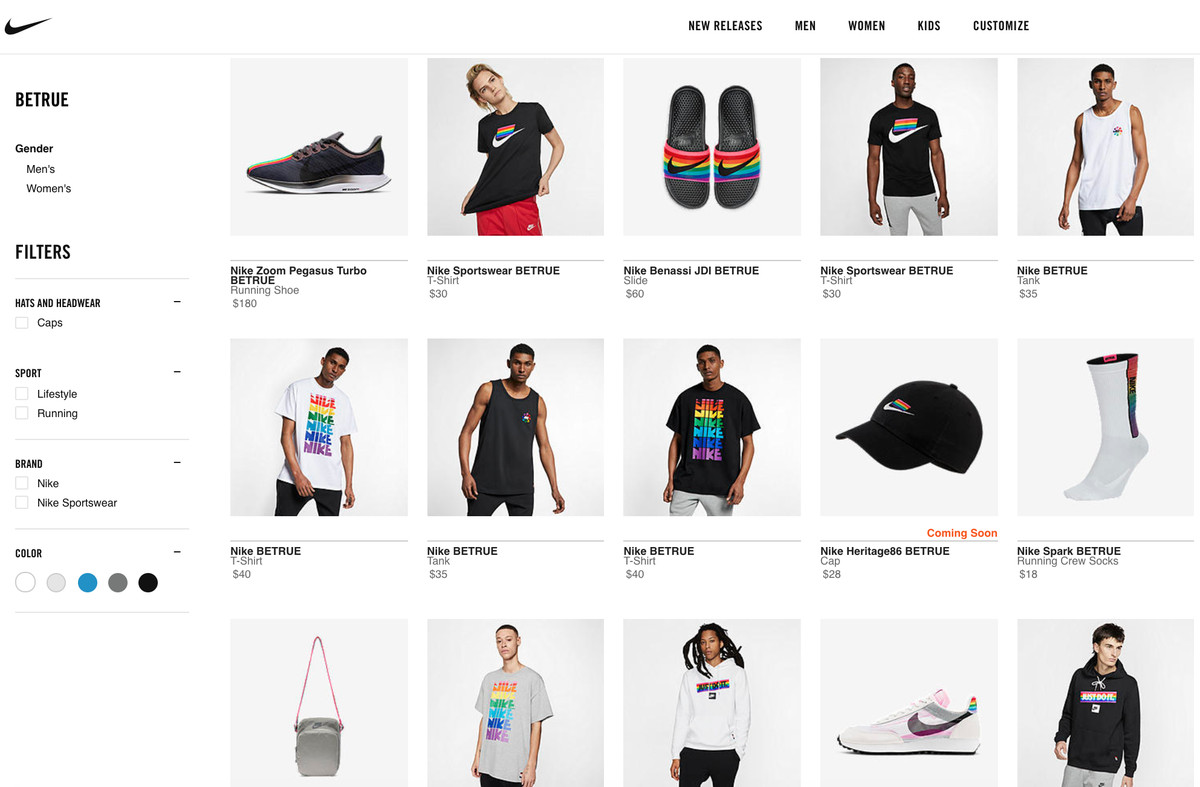 Polo Ralph Lauren has dunked its well-known polo pony in rainbow stripes on tee shirts, Polo shirts, hoodies, totes and baseball caps. They’re sold in stores and at ralphlauren.com and range from $29.50 to $150. The company is donating 100% of the purchase price from the sale of each graphic T-shirt, and 50% of sales from each Polo shirt, hoodie, hat and tote, to Stonewall Community Foundation.

Reebok, a subsidiary of Adidas since 2005, is donating a portion of the proceeds from its Pride collection to Fenway Health. The brand offers just 12 Pride products, ranging from $16 to $75 (plus tax and shipping).

Introducing the Pride Collection. Made with love. For love. | Between May 15th and June 30th Reebok will donate a portion of the proceeds from the Reebok Pride Collection to Fenway Health. @FenwayHealth https://t.co/rg9Ork7RxB pic.twitter.com/wlKUWV4Zwb

As The Source reported, the Club C, Classic Leather and Freestyle Hi all feature rainbow patterns, and there are socks and other apparel available, too, at Reebok’s online store. 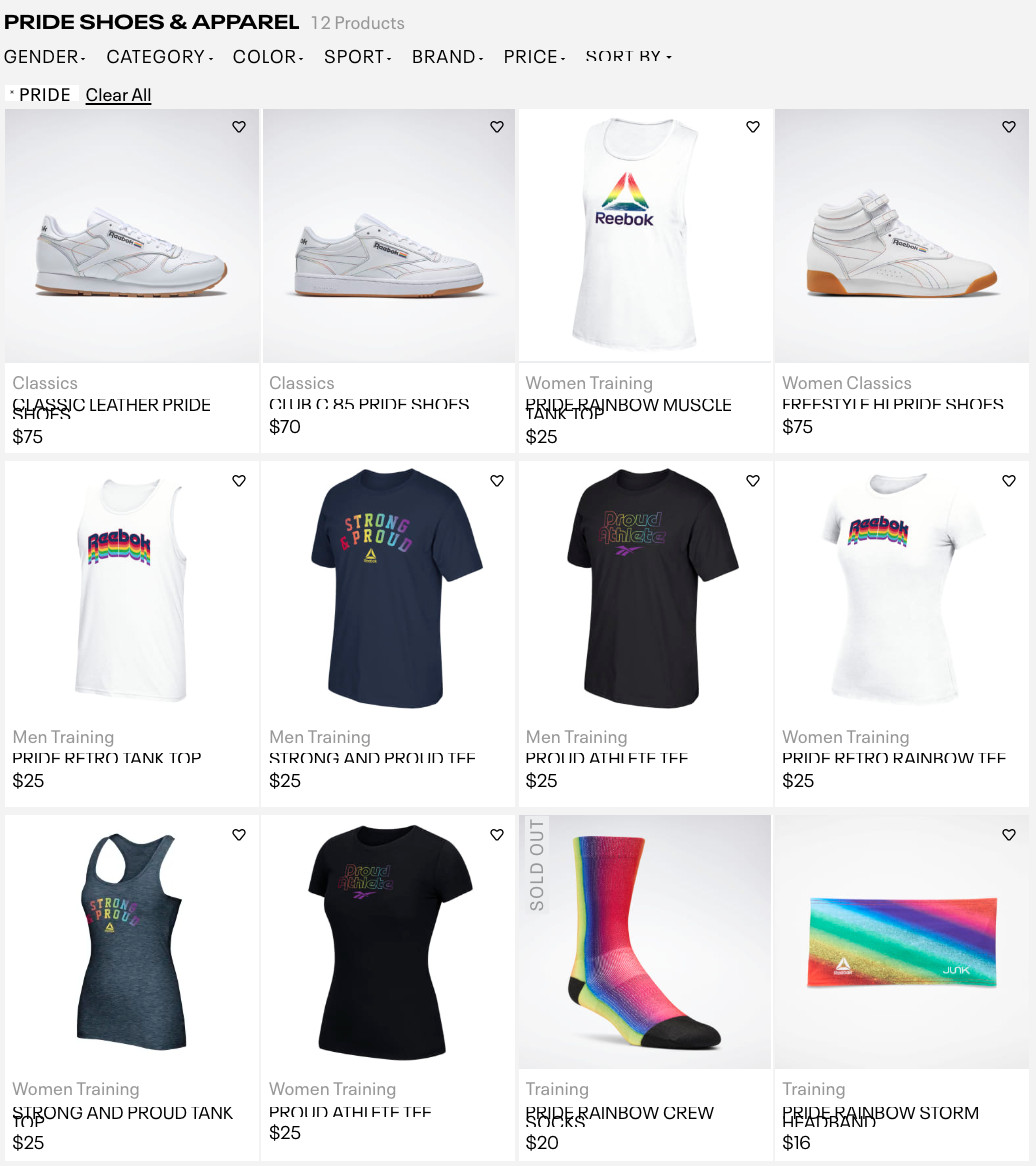 Singers Tegan and Sara teamed up with Teva to create a limited-edition sandal for Pride month: the Flatform Universal Pride model costs $80 and features a rainbow-splashed 2.5-inch seven-layer EVA platform. The shoes are available at Teva.com and Nordstrom. Teva will donate $15 to the Tegan and Sara Foundation for every pair sold.

Under Armour is selling its UA Hovr SLK shoe with a “United We Win” Pride-inspired theme for $120. There’s also apparel, socks and more available at underarmour.com and Macy’s. Under Armour supports Athlete Ally.

More products are available for review at Footwear News.