Home Gay Life LGBT flag will fly over Houses of Parliament in support of London... 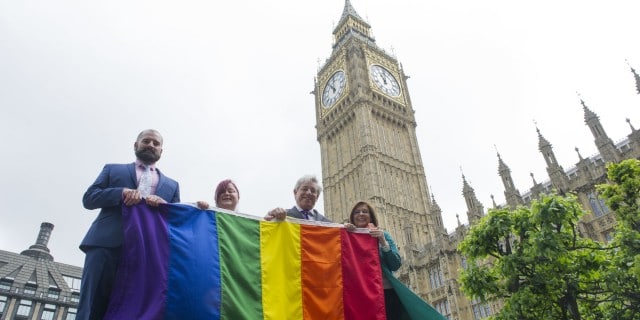 LGBT group of GB ParliOUT presented the speaker of Great Britain John Bercow with a rainbow flag for the occasion.

It was decided to hang the rainbow flag on Houses of Parliament and it will fly here the next month for the first time in London.

The Cabinet Office and the Department for Education were the first government departments of London where LGBT flag has already flown in the past.

Yesterday it was announced that the flag will be flown from Portcullis House in Westminster during the period of London Pride Parade in June 24-26.

John Bercow siad: “The Houses of Parliament will join the Pride in London celebrations by flying the LGBT rainbow flag from the top of Portcullis House for the entire Pride weekend.

“This is the very first time the rainbow flag has been flown from Parliament and we are delighted to mark the occasion in this way.”

His statement goes: “The Houses of Parliament are delighted to be taking part in the Pride in London Parade once again.

“The Pride in London Parade is an annual event for London’s LGBT+ people and a chance to be visible and speak loudly about what they have achieved and what is still needed.

“As well as promoting Parliament as an inclusive employer that is proud to support its LGBTIQ staff, London Pride is a great way to raise awareness of Parliament as a democratic institution that everyone can get involved with and make themselves heard.

“To mark ParliOUT’s fifth entry in the Pride in London parade, the ParliOUT membership raised the necessary money to purchase a rainbow flag to be gifted to Parliament so that this year, the flag could be flown above Portcullis House.”

London’s Speaker John Bercow is used to be known as a passionate supporter of LGBT rights, who speaks out for equality of all people all the time.