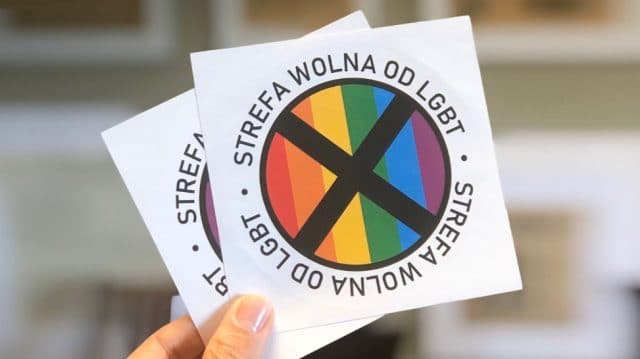 A Polish news magazine has announced plans to distribute stickers proclaiming an “LGBT-free zone” to its readers, reports CNN.

The far-right weekly publication Gazeta Polska said it intends to include the stickers, which feature an image of a black cross over a Pride flag alongside the inflammatory slogan, in its next issue.

The stickers have sparked international outrage and was criticized by the US Ambassador to Poland.

“I am disappointed and concerned that some groups use stickers to promote hatred and intolerance,” Ambassador Georgette Mosbacher said on Twitter Thursday. “We respect freedom of speech, but we must stand together on the side of values such as diversity and tolerance.”

On Friday, Piotr Muller, a spokesman for the country’s ruling Law and Justice Party, issued a rebuke to Mosbacher, saying her statement was “unnecessary.”

“It seems to me that this is not an issue related to relations between America and Poland,” the AFP news agency reported him as saying.

Pavel Rabiej, deputy president of Warsaw and a centrist, said on Twitter that he would file a complaint with the prosecutor’s office.

Instagram blocked a picture of the sticker according to Gazeta Polska editor Tomasz Sakiewicz.

“Censorship was typical of Nazism, imposing ideology, too,” Sakiewicz told another paper.