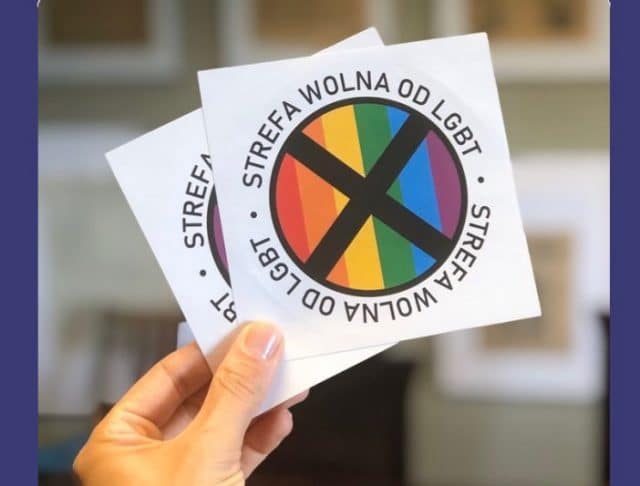 A magazine in Poland is going to be distributing “LGBT-free zone” stickers to their readers. Gazeta Polska is a far-right nationalist weekly magazine in Poland that supports the Law and Justice Party, which is anti-LGBTQ and anti-immigrant.

The magazine said that it will be distributing stickers that say “LGBT-FREE ZONE” and show a rainbow flag with an “X” through it in next week’s issue.

Pavel Rabiej, deputy president of Warsaw and a centrist, said on Twitter that he would file a complaint with the prosecutor’s office.

Poland’s hate speech law does not include sexual orientation, but Instagram blocked a picture of the sticker, according to Gazeta Polska editor Tomasz Sakiewicz.

“Censorship was typical of Nazism, imposing ideology, too,” Sakiewicz told another paper.

Georgette Masbacher, the U.S. Ambassador to Poland, denounced the stickers on Twitter.

“I am disappointed and concerned that some groups use stickers to promote hatred and intolerance,” she wrote. “We respect freedom of speech, but we must stand together on the side of values ​​such as diversity and tolerance.”