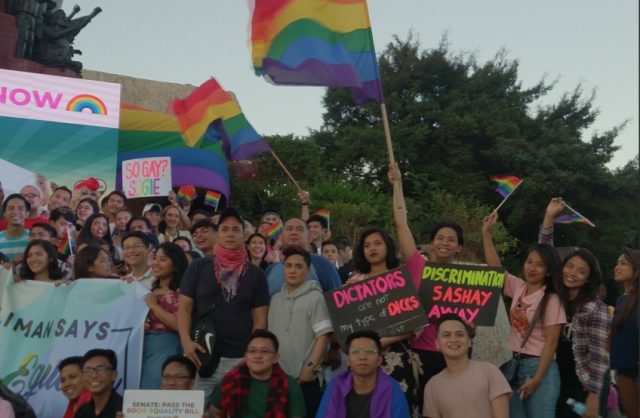 A coalition of LGBTI rights groups in the Philippines has slammed an by the country’s Congress.

It was ‘misleading and irresponsible to ask for public opinion on a nuanced issue with such inadequate information and narrow choices’ the Lesbian and .

‘Our Congress should not decide on our rights solely on the basis of personal opinions or mere online polls … Let our choices be informed and our voices be heard,’ it also said in a Facebook statement.

The group also slammed Civil Partnership Bill currently in the House as failing to give equal rights.

‘Are you in favor of the proposal in the House of Representatives which legalizes same-sex unions as a civil partnership in the country?’ The poll asks.

Respondents can choose between three replies:

‘Yes, because this will give equal civil rights to same-sex couples. The bill provides such couples with legal partnership status that will govern their property rights, custodial rights over children and adoption rights.’

‘No, because the underlying intention is to legalize marriage between members of the same sex and I personally believe this is wrong.’

A bill prohibiting discrimination based on sexual identity or gender identity is languishing in the country’ senate.

Articles 1 and 2 of The Family Code of the Philippines defines marriage as between man and woman.

A judge on the Supreme Court in 2018 said the country’s existing constitution and civil code could allow same-sex civil partnerships.

But, LAGABLAB on Wednesday said it will not ‘in any way be marriage equality’.

The bill ‘creates a distinction between married couples and civil partners’ the group said.

‘It further creates a secondary status for LGBTQI couples — a dangerous consequence at a time when it is still legal to discriminate on the basis of sexual orientation, gender identity, and gender expression.’

Taiwan last week became the first country in Asia to