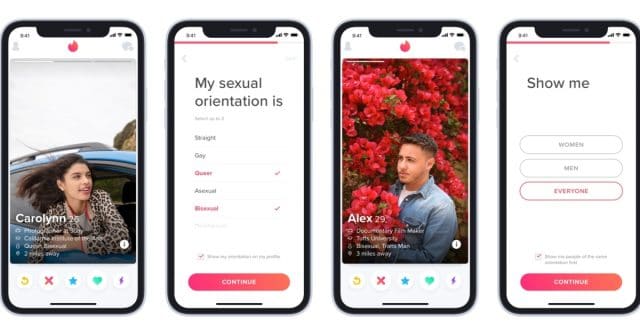 LGBT+ Tinder users will now be able to pick up to three sexual orientations to find better matches, the dating app announced on Tuesday (June 4).

Tinder has teamed up with GLAAD to develop a new feature which allows users to share information about their orientation to help decide who they are matched with.

Tinder CEO Ellie Seidman said: “We want all of our users to feel empowered expressing who they are while connecting with new people, and we’re always working to make that easier for our users on Tinder.”

To add sexual orientation on Tinder, users will need to visit the ‘edit info’ page in the app and tap ‘orientation’.

Then they can select up to three terms to describe their sexuality, decide whether to display it on their profile and choose whether matches of the same orientation will be suggested first.

The sexual orientation feature will roll out to iOS and Android users in the US, UK, Canada, Ireland, India, Australia and New Zealand throughout June 2019.

Tinder surveyed 1,000 LGBT+ people and found that 80 percent thought that dating apps and online dating had positively benefitted the community. Of these, 45 percent said it provided more diversity of people to date in terms of sexual orientation.

“Dating apps are invaluable platforms for connecting the LGBTQ+ community, and we’re beyond proud to continue our efforts, in partnership with GLAAD, to improve the community’s experience on Tinder,” said Seidman.

“Tinder continues to show a dedication to inclusivity with updates that reach millions of people and create safer spaces for LGBTQ users,” said Rich Ferraro at GLAAD.

This summer Tinder will also be offering free advertising on the app to LGBT+ charities to promote “social, political and cultural equality of people across all genders and orientations.”

According to Tinder,the additional gender options released in 2016 have led to 80 million new matches among users.