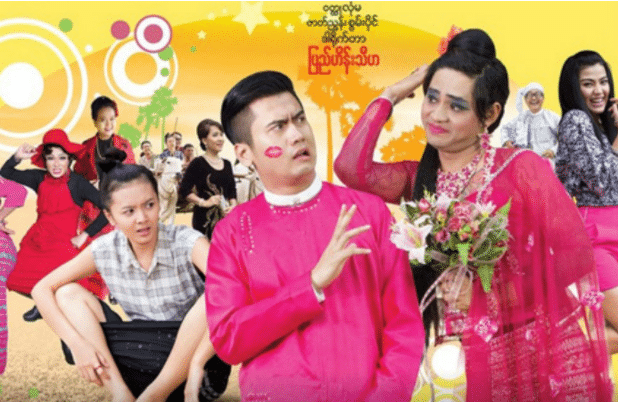 ‘I think it’s a missed opportunity here because the stories of LGBT lives can become wonderful films.’

Critics and LGBTI people are saying enough is enough to the terrible depiction of LGBTI in Myanmar’s film industry.

A recent film, Kyi Kyi Kyal Kyal, tells the story of a trans woman moves from to the city from the country. But then she decides to ‘turn back’ living as a man and it is only then, according to the film, that she can live happily ever after.

‘These characters in the movies wear funny clothes and act in exaggerated ways for comedic effect. They are often portrayed as incompetent, wacky characters,’ U Aung Myo Min from LGBT rights group Equality Myanmar told the Myanmar Times.

The rights advocate said there were a few concerns about the negative representations of LGBTI people in film. The most concerning was the fact LGBTI people would often be cured of their homosexuality. LGBTI people often ‘turn straight at the end of the movies’.

The way LGBTI people are represented could also shape the way the public understands the LGBTI community.

‘It encourages the public to bully and mock LGBT people,’ he said.

‘Many movies promote the misconception that homosexuality can be cured … It’s like being LGBT is a disease.

Ko Hla Myat Tun is the program director for Colors Rainbow LGBT Network. He believed all LGBTI characters in Myanmar films were portrayed negatively. The portrayals made it difficult to encourage equality.

‘[Filmmakers] are humiliating the LGBT community,’ he said.

‘The censorship board of the Myanmar Motion Picture Organisation does not understand the concept of human rights for LGBT people.’

Thaiddhi is the co-founder of one Myanmar’s most celebrated film festivals – the Wathann Film Festival.

He said leading actors are playing the stereotyped characters in some of the country’s highest grossing films.

‘These films are usually blockbusters so they have a big impact on our society. The way we see LGBT people is distorted because of these films,’ he said.

Filmmaker Lamin Oo was disappointed with the portrayal LGBTI characters in his country’s films.

‘[There’s] zero understanding of the nature of their sexuality … I believe these films help to legitimise the stereotypes about LGBT people that are already prevalent in our society,’ he said.

‘I think it’s [such] a missed opportunity here because the stories of LGBT lives can become wonderful films.

‘Myanmar has a long way to go.’