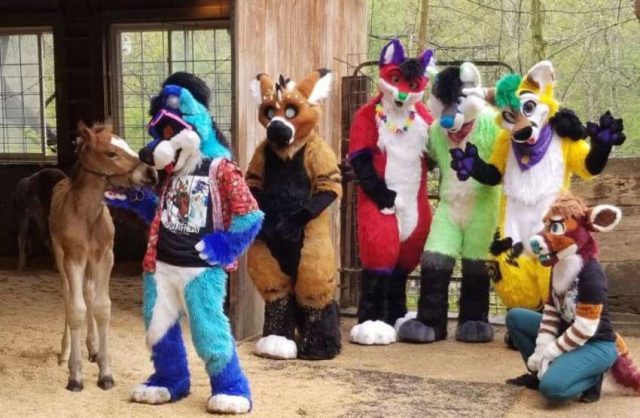 A group of LGBTI furries in a small town in Ohio, USA have come together to raise critical funds for abandoned foals.

Athens, Ohio is best known for being the home of Ohio University, but it’s also home to a bunch of furries passionate about doing good in the world. , with many LGBTI members.

Led by the team at ArtworkTee – a company that print furry friendly t-shirts – the furry community in Athens spent some time trying to decide which charity it wanted to support. Understandably, ‘many furries are big supporters of animal charities’, according to ArtworkTee Staff Member, J Neil Wacaster.

‘One of our most well-known participants, known around the furry community as her character ‘Telephone’ takes care of horses herself,’ Wacaster told Gay Star News.

‘She cares deeply about the mission of Last Chance Corral to help save nurse-mare foals that would otherwise be euthanized.’

Last Chance Corral is a rescue charity for abandoned and abused horses and foals. The charity saves the lives of more than 150 horses per year. It costs $1,000 (€883) to rescue and raise a foal until it can be adopted out.

Victoria Goss of Last Chance Corral explained they want to give the young horses the best chance in life.

‘We wanted to put our efforts into something that people don’t want to work with, which is newborns. We needed to at least give them a chance,’ she said.

Thanks to Telphone’s passion the groups settled on Last Chance Corral and they managed to raise $60,000 (€53,010) in just a matter of weeks.

Wacaster explained how the community raised so much money, so quickly.

‘The furry community is very generous, giving hundreds of thousands of dollars to many animal, LGBT, and children’s health charities every year,’ Wacaster said.

‘We are humbled and grateful that the community helped our posts go viral and got behind us and this great charity that needed our help. Several of our friends posted videos on their YouTube channels, which also helped a ton of people find our campaign.

‘In fact, Athens Ohio is the location of where the horse rescue is – our team that worked on this project is from all around the country and the world.

‘It was a big task to get everyone together and make the charity video, but the result was so incredible.’