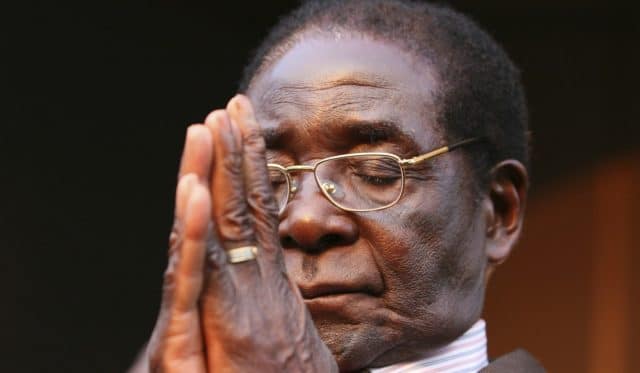 ‘The people of Zimbabwe deserve better‘

LGBTI and human rights groups have ‘welcomed the demise of the brutal homophobic tyrant Robert Mugabe in Zimbabwe.

Many groups are now calling on whoever replaces the ousted leader to improve the country’s human rights record.

Mugabe ruled Zimbabwe for 37 years and resigned on Tuesday after a military coup and rising tensions in his own party.

In his 37 years of rule, it is estimated that tens of thousands of people were tortured, forcibly disappeared or killed.

Mugabe’s track record on LGBTI issues was also terrifying.
In 1995 he said: ‘I find it extremely outrageous and repugnant to my human conscience that such immoral and repulsive organizations, like those of homosexuals, who offend both against the law of nature and the cultural norms espoused by our society, should have any advocates in our midst and elsewhere in the world.’

‘Homosexuality degrades human dignity. It’s unnatural, and there is no question ever of allowing these people to behave worse than dogs and pigs,’ he said in 1995.

‘If you see people parading themselves as lesbians and gays, arrest them and hand them over to the police.’

‘Mugabe must rank as one of the worst homophobic leaders worldwide and his cosy relations with the Vatican are hardly surprising,’ said PTT’s Secretary, George Broadhead.

‘Let’s hope that the new regime will be truly democratic and respect human rights.’

Mugabe’s likely successor is Emmerson Mnangagwa, who spent most of his career expressing views aligned with the president’s.
But in 2016 Mnangagwa ruled out making progress on LGBTI rights.

‘With regards to areas that we felt we would not accept, it is issues of gays and homosexuality, which is unlawful in our country,’ he said at the time.

Amnesty International said the people of Zimbabwe deserve better and hope Mnangagwa does a better job on human rights than Mugabe.

‘The people of Zimbabwe deserve better. The next generation of leaders must commit itself to upholding the constitution, living up to Zimbabwe’s international human rights obligations and treating its people with dignity and justice,’ said Salil Shetty, Secretary General of Amnesty International.