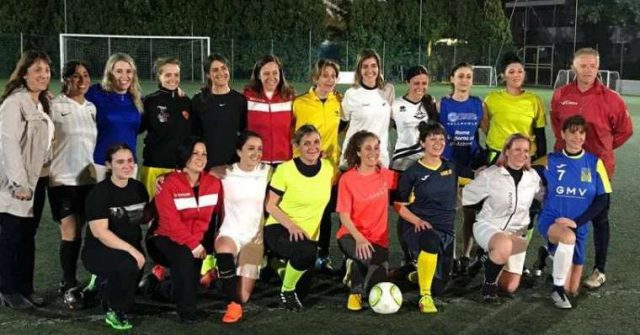 Pro-LGBTQ and reproductive rights protests led to the cancellation of the first match of the Vatican City women’s soccer team in Vienna on Saturday.

The activists who oppose the Catholic Church’s teachings on abortion and LGBTQ rights displayed pro-LGBTQ banners, and handed out informational leaflets. But they weren’t just in the stands, but on the field as well: Opposing players also sent a message to the Vatican City team by wearing shirts advocating for reproductive rights.

As a result of the protest, the team canceled the match before it began.

According to the Catholic News Agency, the Vatican women’s team was supposed to play against Vienna FC Mariahilf. Both sides had participated in an on-field prayer service earlier in the afternoon.

But as the Vatican City anthem played, right before the kickoff, several Vienna FC Mariahilf players removed their jerseys to reveal shirts “displaying painted ovaries and pro-abortion messages,” according to the CNA.

The Telegraph reports that one player’s shirt read “My body, my rules,” and a banner read “Oppose homophobia.”

Austrian state broadcaster ORF said that protesters did not know that the local Apostolic Nuncio, Pedro Lopez Quintana was in attendance, nor that their actions would shut down the game, “ruining many weeks of preparation.”

Danilo Zennaro, a representative of the Vatican sports association, told ORF, “The game was called off because we are here for the sport, and not for political or other messages.”

Quintana, a diplomatic representative of the Vatican, reportedly wasn’t involved in the decision to shut down the game.

According to The Telegraph:

The new Vatican women’s squad was announced with great fanfare in May to combat criticism that the church was not doing enough to include women in key positions amid major scandals over the sexual abuse of nuns by members of the clergy. [The team] includes no nuns but is made up of women who either work in the tiny Vatican state, or are the wives and daughters of men who are employed there.”

Pope Francis has told parents not to reject their gay children but has also said that same-sex couples can’t be families and that gay priests should leave the ministry. The Vatican recently released a guidance for schools which said that transgender people will “annihilate the concept of nature.”

Francis has called abortion completely unacceptable, equating it with hiring a hitman.

It’s unclear if the protesting Vienna FC Mariahilf players will face any consequences for their actions.