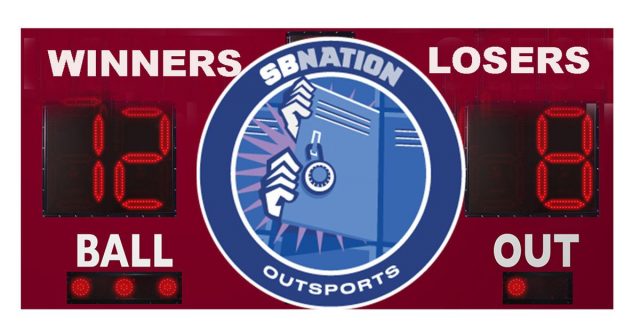 We realize our roster may differ from yours, and we welcome your comments, contributions and critiques. We read them all! Details on how to reach us are below, after our look at this week’s winners and losers.

The Los Angeles Dodgers did up LGBT Pride Night to the nines Friday, with a rainbow-colored “LA” on the mound and Pride flags flying at Dodger Stadium.

”For the first time ever at Dodger Stadium, the LGBT flag flies alongside the American flags,” the Dodgers tweeted prior to the game with the Philadelphia Phillies.

Tennis legend and LGBT icon Billie Jean King, a part owner of the team, said she “couldn’t be more proud of the welcoming, inclusive space the Dodgers are creating for all their fans.”

LOSERS: The MLS Teams Not Holding A Pride Night

MLS’ Soccer For All campaign opposes bullying and discrimination via programs, events, clinics and fundraisers aimed at poor, disabled, LGBTQ and other marginalized communities. As Daniel Villarreal reported, MLS has declared all of June “Soccer for All Month” and 18 of the 24 MLS teams are holding Pride Nights this month. Some, like the LAFC, Vancouver White Caps and Sporting Kansas City, held theirs last month.

But to those six teams that, for whatever reason, aren’t offering their LGBTQ fans and staff a night to celebrate their identities: you obviously missed the GOOOOOOOOAAAAAL of Soccer For All Month.

WINNERS: LGBTQ Fans of The 49ers

Jim Buzinski reports: San Francisco 49ers’ Richard Sherman and George Kittle are part of an official team announcement on the formation of a group for fans who identify as LGBTQ+.

“Forty-Niner faithful — you’ve helped us pioneer a group of dedicated fans for over 70 years. We’re proud to announce 49ers Pride, the official community of 49ers fans who identify as LGBTQ+ and allies,” Sherman, a cornerback, said in the team’s video announcing the group.

“As we prepare for the upcoming football season, we want to celebrate the passion of all the faithful, no matter how they identify,” said Kittle, the team’s starting tight end. “If your team is the Red and Gold, you belong in the 49ers family.”

The group is the first in the NFL specifically team-sanctioned for LGBTQ fans and it was a great move to have players part of the announcement. There are no openly gay players on the 49ers or anywhere in the NFL, though the 49ers do have an openly gay assistant coach, Katie Sowers. Having two name players participate gives the formation of the group more meaning.

Just last week, the fast food chicken chain was one of our winners, but the mighty Madison Mallards of Wisconsin dealt the Christian-based corporation a setback this week. The college baseball team dropped Chick-fil-A as one of its sponsors.

As Brian C. Bell reported, the Mallards’ management cited the fast food chain’s reputation for supporting anti-LGBTQ organizations, such as the Fellowship of Christian Athletes, as the reason for their business relationship dissolving.

Franklin Pierce senior CeCe Telfer won the 400-meter hurdles on Saturday night and went on to post victory by more than a second, in a personal collegiate-best time of 57.53 seconds, according to the university website. Her finish was two seconds shy of the NCAA Division II record. As far as we know, she is the first publicly out transgender woman to win an NCAA track & field title.

Athena Del Rosario is a trailblazer in sports. Now she’s bringing that ground-breaking spirit to the international stage.

As Jim Buzinski reported, the former NCAA soccer player has been included on the Team USA women’s beach handballroster for their upcoming training camp this summer. Del Rosario is a transgender athlete who previously played goalkeeper for the UC-Santa Cruz women’s soccer team.

“I’m super excited about this opportunity to be a part of this team and be able to train and play at the highest level,” Del Rosario said. “Greece is the current world champion, so it will be a perfect opportunity for the team to prepare for the upcoming NORCA championships in July, which is a qualifying event for the 2020 IHF Championship in Italy.”

Caster Semenya is taking her fight to compete like every other woman to the next level. And until she gets her day in court, we’ll hold off as to whether to call her a winner or a loser — although we will always, always, always call her a woman.

Late Wednesday, the legal team for the South African Olympian filed her appeal of the Court of Arbitration for Sport verdict to Switzerland’s Supreme Court. The appeal challenges the CAS ruling in favor of a proposal by the International Association of Athletic Federations.

The IAAF won the fight to force Semenya and women sprinters like her to have their testosterone chemically suppressed, if she is to ever compete again in the 800m, the event in which she clearly excels. Semenya won gold in the Olympic Summer Games in 2012 and 2016.

In the aftermath of those and other victories, the IAAF attempted to restrict races from the 400m to the mile to women athletes whose blood testosterone level is below five nmol/L for at least six months. Plus, they will have to maintain a reading below that level going forward to continue as an athlete in those events.

The May 1 ruling by the CAS called the IAAF’s new rule “discrimination” and in the same sentence deemed it “necessary.”

WINNERS: Our Out Athletes

Tim Culin-Couwels kept his bisexuality hidden at Penn State and he learned a valuable lesson about acceptance.

Kirk Walker never set out to be a pioneer, but in the past 12 years he has become one for a generation of LGBTQ people in sports. The assistant softball coach at UCLA was himself a one-time closeted gay man in sports until he came out on 2005 and did a profile in Outsports in 2007. Three years later, an article in the New York Times spread his story to an even wider audience.

Walker has become a confidant of countless LGBTQ people in sports, helping them reconcile the pressures of balancing their sexual orientation with the sport they love.

AEW’s Nyla Rose made history as the first out trans woman ever signed to a full-time contract with a major wrestling promotion, Brian C. Bell reported.

When she took on Dr. Britt Baker and Kylie Rae at Double or Nothing on May 25, Nyla Rose came full circle to be the inspiration she once found in Marriah Moreno and Chigusa Nagayo. All that was left is to sit-out powerbomb the glass ceiling for trans women even more.

“Let’s be real: we are going to face certain difficulties, certain discriminations. It has happened to me. I’ve been very fortunate in regards that no one has outright done it to my face. But for other trans wrestlers that I know, a lot of them are going through that same first step that I went through. Is this a place for me? Am I going to be welcomed? How is the world going to receive me,” asked Rose in a 2017 interview on YouTube series Wrestling With Wregret.