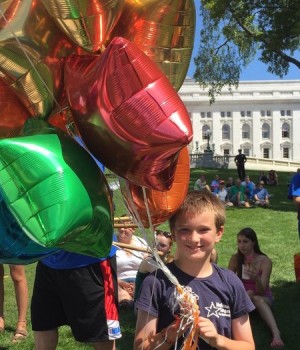 Sometimes, the best or most interesting kind of news is when a kid behaves like an adult. Well, this was the case on the ninth of August, during the yearly Pride celebrations. The celebrations took place in Madison, in the state of Wisconsin. This was a parade which is quite known due to the number of people present. But some of them were homophobic to the parade. Everything was going well, until a boy decided that enough was with some of the terrible signs. The story of this young boy shows that persistence plus a few balloons will go a long way.

Like most parades, this one was full of signs held up high by the people, expressing how they feel about gay people. As the parade was going on, a young little boy noticed that some of the signs being held by the protesters were quite offensive. A few of the signs had slogans such as “sodomy is the same as Bestiality” and also “gay sex is a sin”. When the boy saw such signs being held up, he made it his mission to make sure the signs could not be viewed by the world. The unknown boy first took a balloon and stood in front of the signs. The protestors moved so as to get away from the balloon, but an unknown person gave a young boy so many colorful balloons, which he used to cover the awful messages. It is stated that as the protestor tried to move, the boy stood his ground and was very persistent in making sure the sign was blocked from viewing. A few minutes later, the angry partisan went on to join the rest of the homophobes; however the boy still followed him. After being followed, the man finally gave up, rolled up his sign and left the parade. The boy then went on to the next protestor, and did the same thing. He held up his bright balloon over the second protestor as the crowd started singing “We shall overcome”. This did not demotivate the young boy. There still were other signs quite harmful and awful, so he made sure to take his balloons along with him and block every sign that was held by a protestor.

As the boy walked in front of each protestor, they rolled up their signs and had enough. As the protestors were leaving, the crowd encouraged the young boy, by cheering and clapping. This was quite a moving scene. Thus the smallest sign of love could go a very long way, shown by the little boy with his bunch of colorful balloons.