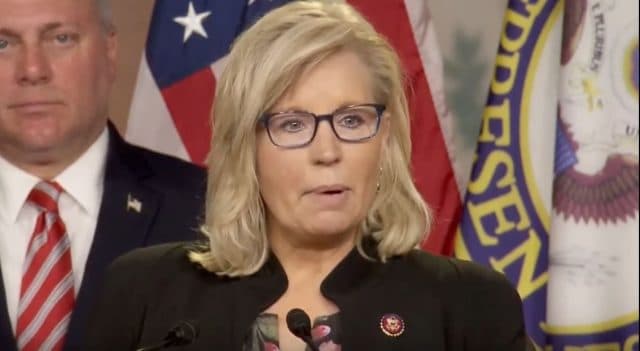 Rep. Liz Cheney (R-WY) on Tuesday defended President Donald Trump amid widespread backlash for his comments urging four progressive Democratic congresswomen of color to “go back” to the “totally broken and crime infested places from which they came,” even though they are all U.S. citizens.

Speaking at a press conference Tuesday, Cheney accused Reps. Alexandria Ocasio-Cortez, Ayanna Pressley, Rashida Tlaib, and Ilhan Omar of refusing “to mandate care for babies who are born alive” and accused Pressley of making “racist” comments over the weekend.

“I want to talk about what’s gone on over the last few days. I want to make absolutely clear our opposition to our socialist colleagues has absolutely nothing to do with their gender, with their religion or with their race,” said Cheney. “It has to do with the content of their policies” which she claimed “would destroy America.”

“Our colleagues are wrong when they tell Americans, just as Congresswoman Pressley did just last weekend, that any individual seat at the table is only valuable, is only legitimate if that person espouses some pre-approved set of beliefs deemed appropriate based on their religion or their gender or their race,” said Cheney. “When they say that, that is racist.”

“Our colleagues, our socialist colleagues on the other side of the aisle are wrong when they advocate abortion up until the moment of birth including partial term abortion, late-term abortion and when they refuse to mandate care for babies who are born alive,” she continued.

“They’re wrong when they say their programs help people at the lower end of the economic spectrum,” Cheney said. “Every one of their socialist programs would create massive new government dependency and end the very economic growth we need to ensure everyone can prosper.”