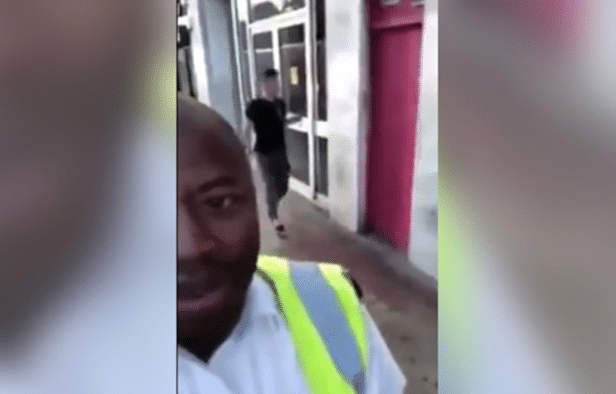 ‘If I could meet the guy I would apologize. I didn’t mean to go out there to distress him like that.’

A London bus driver has issued an apology for making a video of himself mocking a man wearing high heels.

TFL confirmed to Gay Star News they are investigating the incident.

The driver, who works in Merton, asked GSN to not name him to ‘protect his family’.

He told us the incident happened a couple weeks ago in Merton borough. The TFL employee had gone to get coffee at around 8am.

He started making the selfie video on his phone.

When he spotted a man walking behind him in high heels, the driver said it was ‘too early’ for this ‘bomboclat’.

‘Bomboclat’ is a Jamaican expression for shock or surprise.

The TFL worker carried on filming as the man behind saw he was the subject of the video. The man in high heels attempted, in vain, to get out of shot.

Despite him obviously feeling uncomfortable, the driver continued to film the stranger.

Following the GSN article posted yesterday, the bus driver got in touch to issue an apology.

He claimed the video was private for himself. However, his sister shared it online because she found it funny.

‘I don’t have any issue regarding people’s sexuality,’ he said. ‘Hand on my heart.

‘Someone could’ve been wearing space boots and I would’ve said the same thing.’

He said he was just surprised to see a man in high heels.

‘If I could meet the guy I would apologize. I didn’t mean to go out there to distress him like that.

‘I’m gutted. I’ve sat here all afternoon calling and emailing trying to get a hold of Instagram and Facebook to remove the video. It’s not who I am. I’m not homophobic.’

The driver added: ‘I truly am sorry if anyone’s taken offense. I didn’t say anything derogatory about him. I’m really embarrassed and saddened and quite emotional.’

Claire Mann, TFL’s Director of Bus Operations, told GSN this ‘behavior is completely unacceptable and will not be tolerated’.