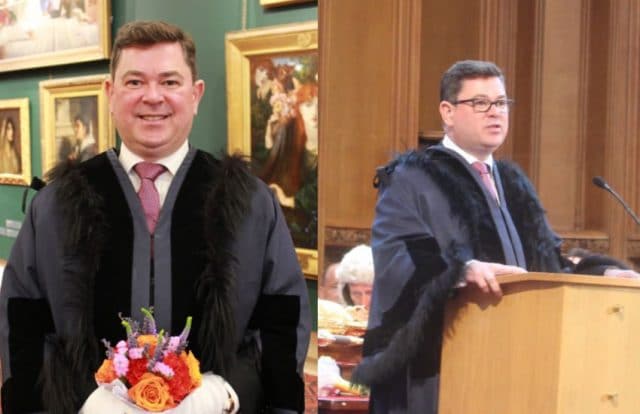 Sheriff-Elect Hailes is active within the LGBTI community, as a long-standing supporter of Stonewall and the Albert Kennedy Trust.

The title of Sheriff evolved in the Anglo-Saxon times. They were a representative of the reigning king or queen and would go around their town collecting taxes.

By 1066, City of London would have two of Sheriffs of their own. They would collect Londoner’s taxes on behalf of the royal exchequer.

Now, the Sheriffs support the Lord Mayor in their civic duties and serve as ambassadors for the UK-based financial and professional services industry. They also support Her Majesty’s Judges at the Central Criminal Court.

The Central Criminal Court (Old Bailey) is recognized as the most famous criminal court in the world and is owned and managed by the City of London Corporation.

‘We need to foster new relationships for the new digital age’
In his acceptance speech, Sheriff-Elect Hailes said: ‘In an age increasingly defined in messages of less than 140 characters, the old distinctions between Left and Right have been replaced by that between the “Haves and Have Nots”, and the young and the old, with those with and without higher education.

‘I have gained some perspective about how the two different worlds – those inside and outside of the Square Mile – interconnect and overlap and perhaps, an understanding of how, and why, we can work for the betterment of them all,’ He said.

‘As well as reinforcing old friendships, we need to foster new relationships for the new digital age and establish new connections. We must also demonstrate that integrity and trust are the bedrock of our civic government and community.’