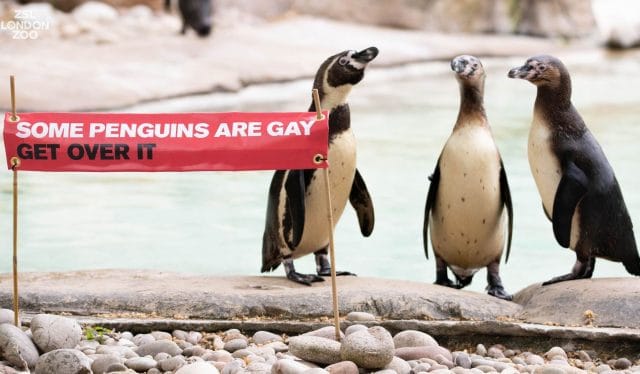 The ZSL London Zoo announced on Wednesday that it will host a Pride celebration next weekend for its same-sex penguin couples.

The zoo said in a release that its colony of 93 Humboldt penguins, which includes three same-sex couples, will all be “joining” in the Pride festivities next Friday.

“Zookeepers have made a special mini banner for the Penguin Beach home of the Zoo’s most famous gay residents, Humboldt penguins Ronnie and Reggie, paying homage to Stonewall’s groundbreaking ‘Get Over It.’ campaign,” the zoo said.

Ronnie and Reggie became a couple in 2014, and famously adopted an egg that was abandoned by another couple a year later. The pair shared parenting duties of their chick, Kyton, until he fledged the nest. They remain as strong as ever and are often found snuggled up in their nest box together.

The duo share their home with 91 other penguins, including fellow same-sex couples Nadja and Zimmer and Dev and Martin, as well as one-year-old Rainbow who hatched during Pride celebrations last year and will celebrate her first birthday this weekend.

On top of Zoo Nights’ packed schedule of activities, visitors will be able to learn about gender and mating in the animal kingdom at a Pride-themed talk, where they’ll discover just how common same-sex pairings are – from penguins and pandas to goats and giraffes. Visitors can check out the Zoo’s pride of lions, enjoy delicious street food from around the world, and score a hole-in-one at the Zoo’s new mini-golf course.

Zoo Nights may be just for grown-ups but the whole family can join in with the Zoo’s Pride celebrations on Sunday 7 July with Rainbow Families – a storytelling show hosted by drag artist Mama G from Petite Pantos, sharing positive tales about “being who you are, and loving who you want”.