Home Gay Life LOOK: Is this the world’s most stunning same-sex engagement photo? 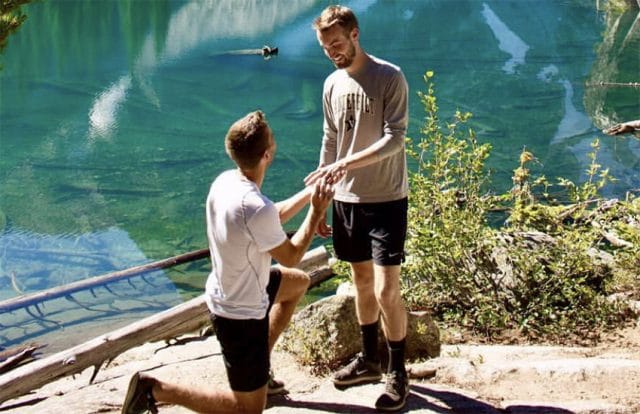 EXCLUSIVE: You’ll be amazed at the planning that went into capturing this beautiful moment

As same-sex marriage rolls out across the world, we’re seeing more and more couples commemorating their engagements with some beautiful photo shoots.

We think this one, posted recently by Instagram user @latuskrf raises the bar – not least because of the stunning backdrop. 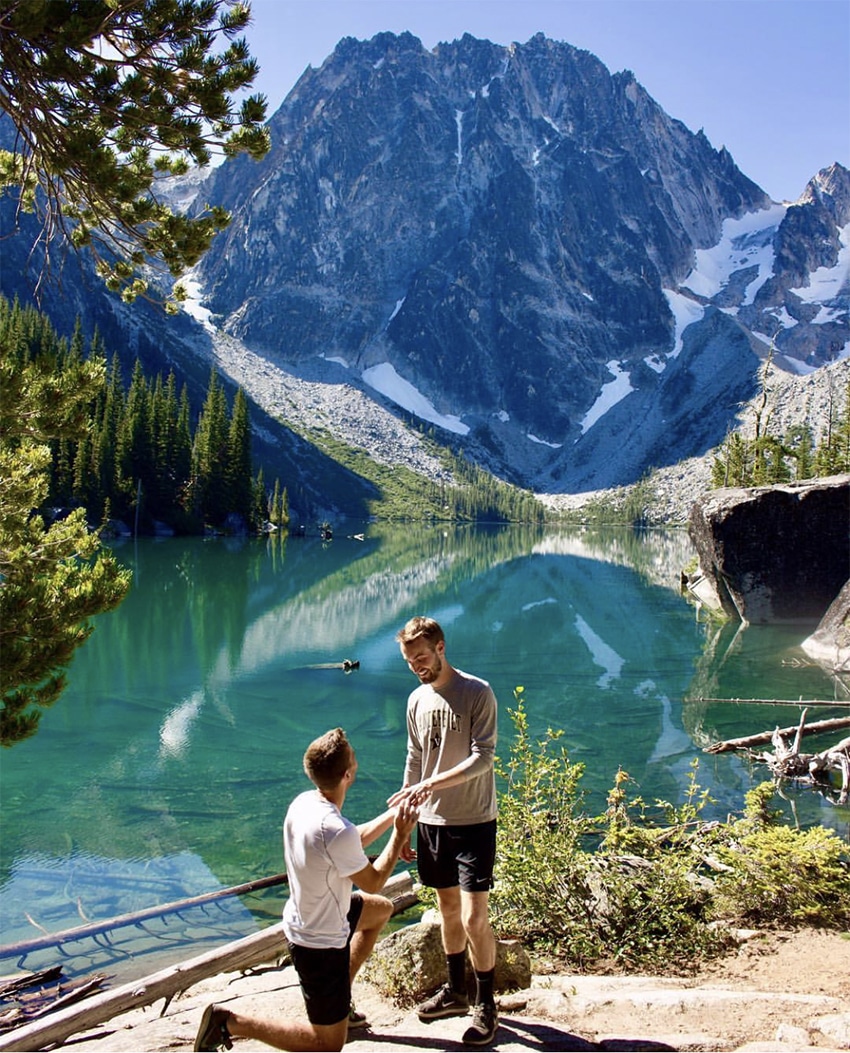 GSN reached out to the couple concerned to find out more details.

They are 28-year-old Richard Latuska and 25-year-old fiancé Nicholas Kuhl. Both are involved in healthcare in Nashville, Tennessee. Rich is originally from Pittsburgh and Nick, who is still studying to be a doctor, is originally from Fort Lauderdale.

‘We met here in Nashville,’ says Rich when asked about their romance.

‘I was in medical school at Vanderbilt at the time and he was an undergraduate at Vanderbilt. We laugh that we met at the gym – both because it sounds like a cliché but also because Nicholas goes to the gym and works out maybe a total of three times a year!

‘At the time I was in charge of the medical school’s “gay-straight alliance” known as “LGBT, M.D.” and therefore was wearing one of the t-shirts we had made to promote the group.

‘This prompted him to come up and ask me if I was in the medical school, how I liked it, etc, since he was pre-med at the time and interested in applying to medical school.

‘We joke that he really was just using me to get his way into medical school. We exchanged numbers as I told him to text me if he had any other questions about medical school and the application process.

‘Once we were texting he is the one who asked me out to dinner as an actual date. We have now been dating exactly five years since then.’ 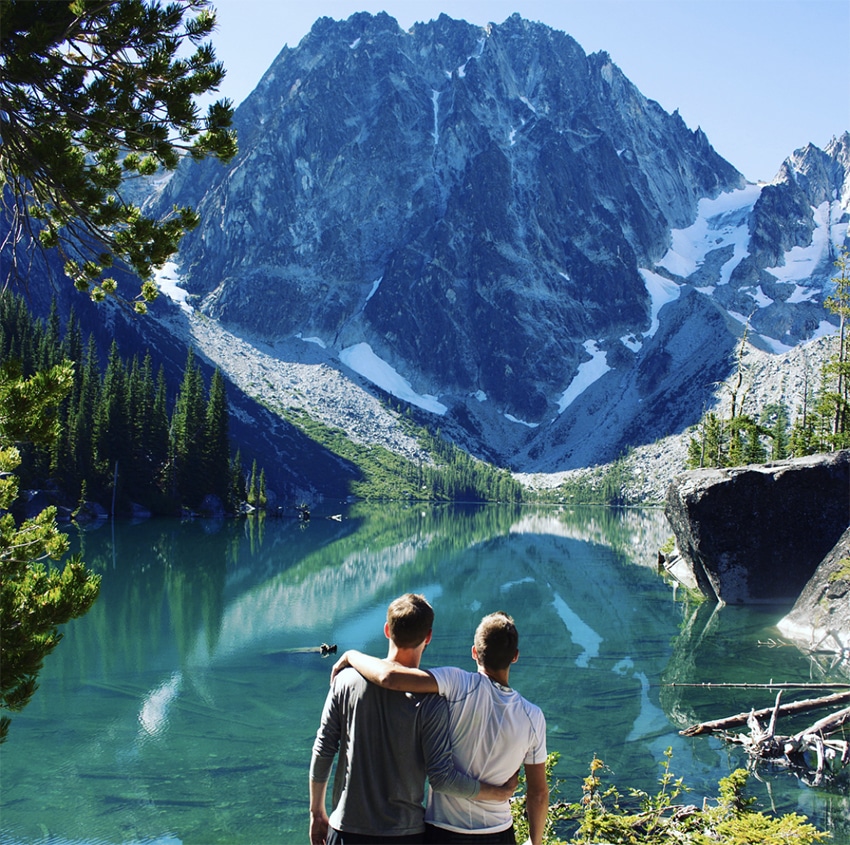 And what about the proposal?

‘I was the one who proposed to him. We both love the outdoors and hiking and have traveled a lot together (Colorado, California, Denmark, Copenhagen, Iceland), so for a long time I had imagined proposing during one of our travels and particularly during a hike somewhere beautiful that we had never been before since we enjoy exploring new places.

‘His mother came to visit Nashville three months before the proposal so I asked her during that visit for permission to marry her son.

‘Once I got the officially green-light, I began the planning. I am also traditional in the sense that I enjoy surprises especially when it comes to an engagement.

‘We both knew we wanted to marry each other and that it would be happen at some time, but never fully discussed or mapped out when that would be, pick out rings together, etc.

‘We each took turns planning different parts of the vacation and I was in charge of planning our long day hike we wanted to do while in Seattle. After researching various options, I came across Lake Colchuck in the Alpine Lakes Wilderness as part of ‘The Enchantments’ and immediately knew this was the spot I wanted to propose.

‘After the fact, Nick admits he “had his suspicions” but was not 100% sure as he noticed I was unbending in terms of the plans around this hike. We needed to get to the lake around a specific time for the photographer which meant getting up at 4.30am to be on the road at 5am (it was 2.5hr drive from Seattle).

‘Nick is not a morning person so he kept trying to push back the time to let us sleep in so said my stubbornness about the day of the hike and time we had to leave made him suspicious.

‘Three days prior we also took the train down to Seattle from Vancouver but it did not leave until 6pm so that morning we got to the train station and planned on leaving our bags there while we walked around Stanley Park (eight miles total).

‘Once at the station I realized the ring was in my large, heavy messenger bag. It was too late to take it out since he was standing right there so I said, “You know what, I think I want to carry my bag… you know, in case we need a phone charger or something else.”

‘He kept stating this was a stupid idea since I would have to walk with this heavy bag for eight miles but I insisted and therefore was stuck carrying this freaking heavy bag around my shoulder the whole eight miles! This also added to his suspicion that “something nice” was in the bag I did not want him to see.’

‘While researching hiking options, Instagram actually recommended a photo for me to view which was one of the alpine lakes in Seattle. After clicking it I saw the person who posted it [@evkev] takes beautiful outdoorsy/nature photographs in the pacific northwest.

‘I private messaged him initially about recommendations or thoughts on various hikes and he is one that helped me find Lake Colchuck.

‘I had looked into hiring a photographer to capture the moment and quickly realized that would be quite expensive. Again, this is a long and difficult hike a from downtown Seattle!

‘I therefore decided to ask this particular photographer on Instagram, Evan, if he had ever taken photos of people before or if he would be interested since I was planning on proposing to my boyfriend at the lake during this hike. He replied that this is one of his favorite hikes and he would be honored to help us capture the moment free of charge!

‘He always wanted to capture sunrise at this particular hike so it worked out that he was able to ensure getting there way before us. He literally left Seattle around 1am to get to the trailhead around 3am and hike in the pitch black darkness with a headlight in order to get to the lake for sunrise.

‘We knew there would not be cell service once hiking so the plan was for him to just set-up camp somewhere that he thought would be a great location/angle and then once we arrived I would just keep walking around the lake until I saw where he was setup.
‘It worked out well because it looked like he was just a photographer capturing pictures of the lake/mountain and we just happened to be in his line of view for a few minutes.

‘We are beyond grateful for this photographer and his incredible generosity’

‘While we were standing there admiring the absolutely incredible, breathtaking views, I told Nick that I could not believe how fast five years had gone by, how much we have experienced and gone through together in that time and how I could not have imagined spending those years with anyone else.

‘That is the point I got down on one knee and told him I’d like to spend the rest of my life with him and asked if he’d like to do the same and marry me.

‘We are beyond grateful for this photographer and his incredible generosity to be there to help capture the moment and take some photos for us.’

Rich says they haven’t yet set a date for their wedding, but would both like to plan a large, family affair. They are tentatively looking at May 2019, when Nick graduates from medical school. 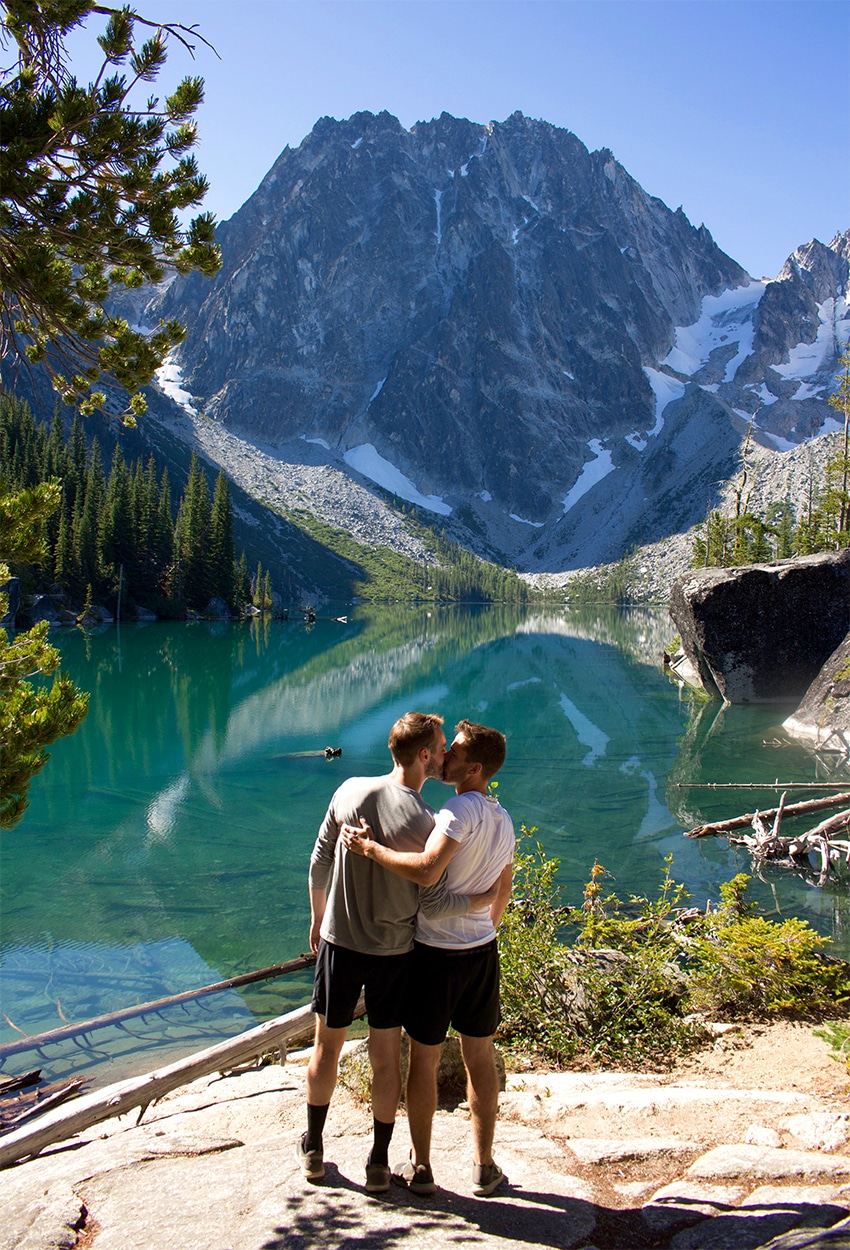