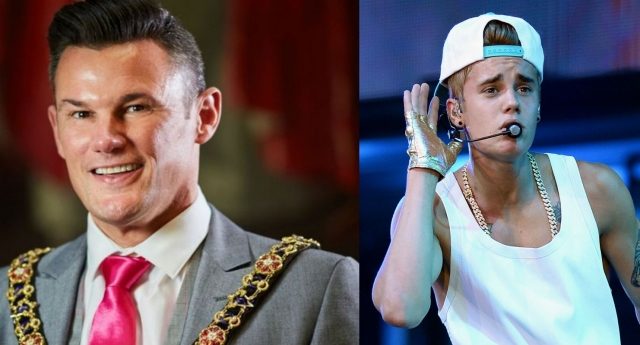 The out Lord Mayor of Manchester has spoken out after being subjected to homophobic abuse at a Justin Bieber concert.

Carl Austin-Behan, a Labour councillor, was sworn in as the city’s Lord Mayor earlier this year, marking the first time the role has been hold by an out politician.

The Lord Mayor had planned to attend a Justin Bieber concert last night at Manchester Arena.

However, on his way to the event, he was accosted by two women who screamed homophobic abuse, referring to him as a “dirty faggot”.

Mr Austin-Behan, who took photos of the women, said he would report the incident to Greater Manchester Police.

Speaking to the Guardian, he recalled that the incident began when he challenged the pair’s homophobic language.

He said:  “That’s when the barrage of comments came back [saying] ‘Am I gay? Am I gay? Am I a dirty faggot?’ and all that sort of stuff that started coming out.

“I was annoyed. I wasn’t shaken up, I was annoyed. Because it was a Justin Bieber concert there was a lot of young people there, and it was a mix of people.

“I was more annoyed that people could go to a gig like that and feel they could get away with saying things like that.”

He added: “I’m in a privileged position at the moment as the lord mayor and one of the things I’ve stood my ground on is that we need to make sure we report hate crime and get that message across. The fact of highlighting that it’s still out there – however small it is, you still have to report it – because there are still people out there who feel it’s all right to be abusive,” he said.

“I’m quite a strong person, I can take that. But if people are still saying those things about someone’s sexuality, I find that really offensive and hurtful. It’s important that we stand our ground and that we demand the respect we should get. It may seem trivial to some people, a bit of name-calling, but it’s highly offensive.”

Police confirmed an incident is being investigated.

Just met 2 ladies who think it's right to be homophobic at a Justin Bieber concert calling me a dirty fagot and a dirty gay @GMPCC @gmpolice pic.twitter.com/YuqrggjCnl

Mr Austin-Behan was forced out of the RAF in the 1990s because he is openly gay, just years before the ban on gay servicepeople was lifted.

He took the coveted Mr Gay UK crown back in 2001 while working as an events manager, well before deciding to enter politics.

The former pageant winner later became a Labour councillor on Manchester City Council, and was named earlier this year as the Labour group’s choice to be the city’s new ceremonial Lord Mayor.