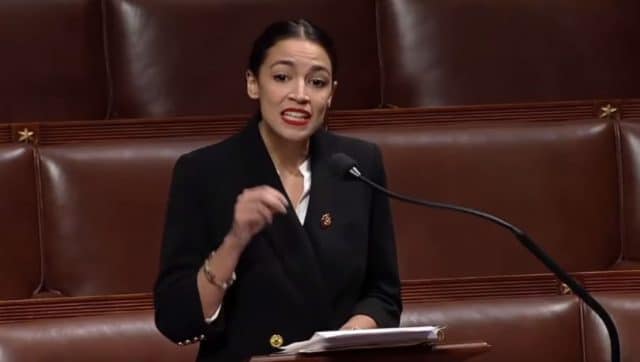 A police officer in Louisiana posted a comment on his Facebook page this past week calling for U.S. Rep. Alexandria Ocasio-Cortez to be shot, reports NOLA.com.

According to the newspaper, Charlie Rispoli, a 14-year veteran of the police force in Gretna, Louisiana wrote on Facebook: “this vile idiot needs a round… and I don’t mean the kind she used to serve.”

The threat was posted along with a fake news story with the headline “Ocasio-Cortez on the budget: ‘We pay soldiers too much’.” The freshman Congresswoman has never made such a comment.

Snopes had debunked the veracity of the “we pay soldiers too much” quote by Rep. Ocasio-Cortez earlier this week, attributing it to a “satirical” website called Taters Gonna Tate. “The comment, which alludes to the freshman Democrat’s past work as a New York City bartender while apparently saying she should be shot, comes amid increasing scrutiny of racist and violent social media posts by police officers in departments across the country,” NOLA added.

The chief of the Gretna police called the post “disturbing.”

“I’m not going to take this lightly and this will be dealt with on our end,” Chief Arthur Lawson said. “It’s not something we want someone that’s affiliated with our department to make these types of statements. That’s not going to happen.”

“Whether you agree or disagree with the message of these elected officials and how frustrated you may or may not get, this certainly is not the type of thing that a public servant should be posting,” Chief Lawson said.

Rep. Ocasio-Cortez said last week that Trump’s attacks have created a threat to the safety of her and her colleagues.

“The point is to target us,” Ocasio-Cortez said. “The president is evolving as predicted, deeper into the rhetoric of racism which involves violence.”

Back in May, the Congresswoman said on Twitter that “I’ve had mornings where I wake up & the 1st thing I do w/ my coffee is review photos of the men (it’s always men) who want to kill me.”

“It’s crystal clear to me that [Omar’s] life is in imminent danger,” said Democratic Illinois Rep. Bobby Rush in a statement.

“[Trump] has threatened the safety of a member of Congress,” he added. “That takes this to a whole different level.”