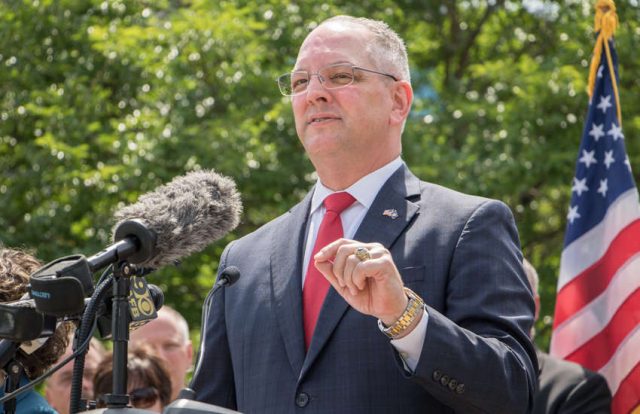 Lawmakers in the US state of Louisiana on Wednesday (29 May) approved an abortion law prohibiting procedures once a heartbeat is detectable.

By a vote of 79-23, lawmakers effectively banned abortions as early as six weeks into pregnancy.

More than a dozen Democratic lawmakers joined all the Republicans in voting for the new law.

In a statement, he said he ‘ran for governor as a pro-life candidate’.

‘As I prepare to sign this bill, I call on the overwhelming bipartisan majority of legislators who voted for it to join me in continuing to build a better Louisiana that cares for the least among us and provides more opportunity for everyone’ he said.

The law does not include exemptions for a pregnancy due to rape or incest.

But, it does allow for abortions if the mother’s life is at risk. It also allows abortions if pregnancy may cause ‘substantial and irreversible impairment of a major bodily function’.

The law requires an ultrasound to see if a heartbeat is detectable.

It includes penalties for abortion providers, not women seeking abortions. Doctors breaking the law face up to two years in prison. They would also lose their medical license.

Alabama governor Kay Ivey signed the in the nation on Tuesday night, making performing an abortion a felony in nearly all cases. Doctors would face up to 99 years in prison.

All those in favor of the bill were white male GOP members. All female senators opposed the proposal.

The rush to restrict abortion comes as opponents push for new restrictions in the hope that the more conservative-led US Supreme Court will overturn the Roe vs Wade case.

The landmark ruling by the US Supreme Court in 1973 saw courts made abortions a constitutional right across the nation.

Undoubtedly, the attack on an American’s right to an.

GLAAD, the world’s largest LGBTI media organization, denounced the bills. ‘Limiting access to abortion is not just a women’s issue — it is an issue that affects us all,’ said Clare Kenny, Director of Youth Engagement for GLAAD.

A 2015 found these bisexual and lesbian women are almost twice as likely as straight-identifying women to get pregnant before the age of 20.