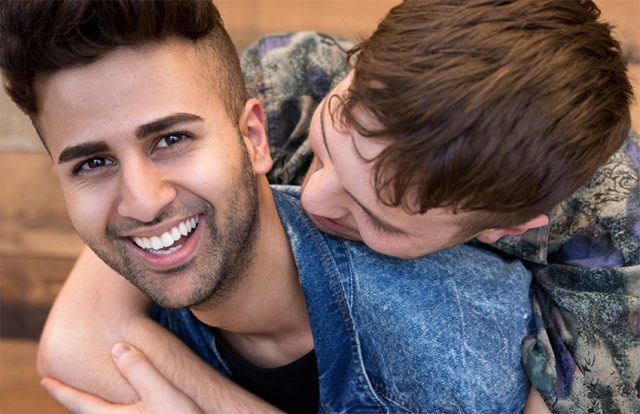 This week, Lush Australia and New Zealand has released its Valentine’s Day imagery, and again, it showcases a gay couple.
The annual #LushLoves poster that will appear in stores from 26 January to 14 February features Lush store worker Darren, in Newmarket, New Zealand and his partner Joel.

Lush Australia used a female couple as part of its #LushLoves campaign in 2015.

In a press statement from Lush, Darren spoke about featuring in the campaign.

‘Being in a window with someone that I love so much is quite amazing. This is something so close to us.

‘We know how hard it is to be accepted so hopefully this touches people. It’s not just one person. There are such high suicide rates within the LGBTQI community. We are pretty happy that LUSH takes the time to support the community.’ Although New Zealand has marriage equality, both said that they don’t feel on an equal footing with heterosexual peers when it comes to expressing their love.

‘I can’t think of a time where I thought I’m comfortable to make out with Joel in front of everyone,’ said Darren.

‘Joel and I are so much older than some of the younger people that don’t understand who they really are.

‘We have people that support us but if you think about the people who have no one around them to support them, it’s not hard to believe why suicide rates are so high. We feel like that is the big issue.’

Commenting on the campaign, Peta Granger, LUSH Australia and New Zealand Director said, ‘LUSH will always use any opportunity to present a broader and more realistic image of what love looks like, always using LUSH staff and real couples.’

The cosmetics brand is known for its vocal stance on LGBTI rights.

In 2015 it produced a bar of soap, coated in gold glitter, emblazoned with the slogan #GayIsOK.

It sold the soap in most of its stores around the world, with proceeds donated to LGBTI rights groups. It raised over US$400,000 from the initiative.

Lush Australia and New Zealand has been a strong supporter of introducing marriage equality to Australia.