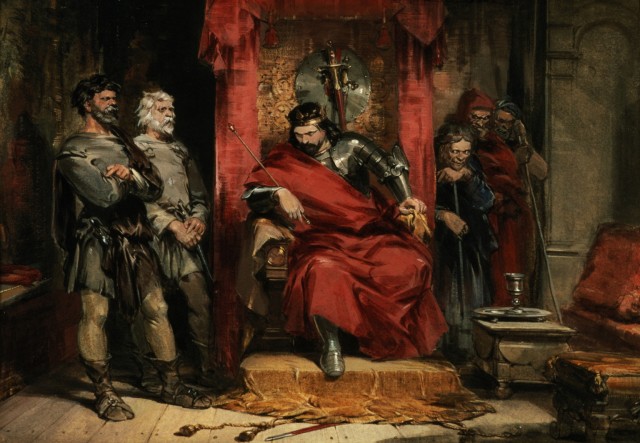 There are many questions out on the internet as to whether or not Macbeth was gay.  The same questions arise of Lady Macbeth.  However, as any great work of art, it is as it is perceived.  One interpretation of Macbeth is found in “Sleep no More,” playing at the McKittrick Hotel in New York.  People in attendance are required to be costumed, after all, it is the second annual Halloween event running for six days, starting Friday, October 26.  The event is called Carnival des Corbeaux, (Carnival of Crows) and the costumes and haberdashery are to “strictly adhere” to the theme each night.

This is no typical showing of Macbeth, however.  The actors and dancers – mostly nude and sparsely clothed- perform a very erotic version of Shakespeare’s monumental play.  The audience is encouraged to play along, for example, October 28, they are expected to “unleash (their) alter ego of the opposite sex.”   And on this night, with the theme of dress being “La Femme a Barbe” (translates to: The Woman Beard), they are encouraged to “dress in (their) gender-bending” best.  The review range from “Sensational….erotic….unique,” from the New York Daily News to “a voyeur’s delight,” in the New York Times, to “a lovely evening in hell,” from the New York Magazine. The public reports theater goers should wear their masks on the train ride home. As if the Carnival doesn’t pique the interest of the LGBT crowd, and the East Coast gender-benders who will come out in droves isn’t connection enough, sit back and wait for December 4.  Macbeth is going to be released on the big screen, starring a very sexy Michael Fassbender as the Scottish King. Viewers who want to get a closer look at his…..uh, Macbeth should check out this film for aesthetic purposes at least. There are many draws for LGBT to want to see this film, and they go way beyond iambic pentameter. These two interpretations of Macbeth revisit the age old questions of the king’s sexual preference, as well as his domineering Queen. One thing is certain, after the experience of “Sleep no More,” and the visual of Fassbender as King, Macbeth goers will have a wholly new interpretation, and get the opportunity to see gender-bending live as it has never been seen before.  We might all just have to read the play again, as our interpretation may call to the LGBT community who no doubt will continue to raise these pertinent literary questions.