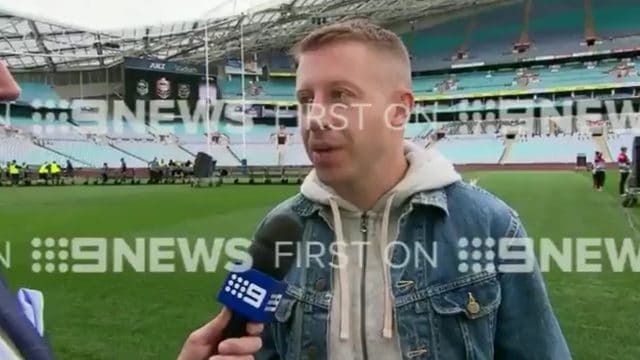 US rapper Macklemore has pledged to donate Australian earnings from his song Same Love to the Yes campaign for same-sex marriage.
The star has found himself at the centre of the country’s gay marriage debate after a backlash from conservative commentators unhappy he will perform the marriage equality anthem at Sunday’s rugby league grand final in Sydney.
In the lead-up to the performance, he said the power of music was not to divide people but create debate and conversation.
“I haven’t figured it out yet but I … want to donate my portion of the proceeds from Same Love that I get off of that record here in Australia to voting yes,” Macklemore told the Nine Network on Saturday.
“I need to figure out what that looks like and how to do that but that is something that I’m going to do.”
Equality campaign co-leader Alex Greenwich said the financial support came at the critical halfway point in the debate.
“Macklemore’s support and indeed his Same Love song continues to inspire and energise our campaign and we thank him for this generous support,” he told AAP.
Australians were becoming increasingly tired of the negativity from the No campaign, Mr Greenwich added.
“I think we need more love songs, not less,” he said.
“Same Love is a song which is about love and happiness and I think that’s what Australians want to hear.”
Macklemore’s active involvement in Australia’s ongoing postal survey is likely to stir further criticism from those already uncomfortable about politics being mixed with sport, including former prime minister Tony Abbott.
Federal MP Bob Katter also slammed the NRL’s decision to invite Macklemore to the grand final, claiming “nobody had ever heard of” the four-time Grammy Award winner.
Senior coalition figure George Brandis criticised Mr Abbott’s selective backing of free speech and described calls to have the rapper’s performance banned as “bizarre”.
Macklemore initially appeared perplexed by the controversy, telling a US radio station he’d received “a lot of tweets from angry old white men”.
“Imma go harder, Imma love,” he told The Cruz Program.
The results of the national postal survey will be released on November 15.