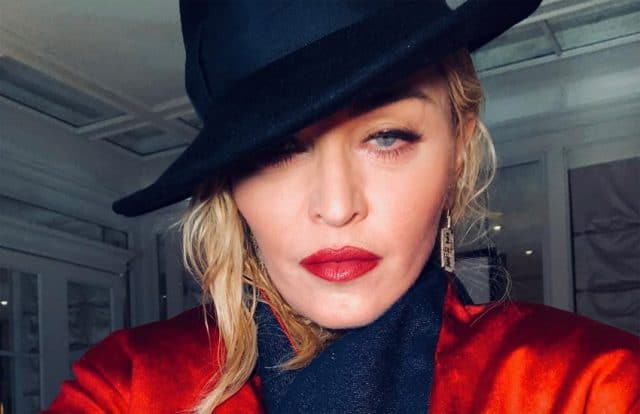 A few days away from the hotly anticipated release of Madame X, Madonna opens up on her new record… and shuts down an old rumor about asking Trump on a date.

The iconic singer, who recently announced , poured her heart out in a conversation with .

Known for being reticent about speaking to the press, Madonna didn’t shy away from taking about US President Donald Trump. Addressing whether she asked him out, she simply denied it.

This was well before Trump’s presidential days. Behind the rumor, ‘one “John Miller,” Trump’s publicist, who Trump swears wasn’t him,’ the NYT interview reads.

‘She called and wanted to go out with him, that I can tell you,’ Miller told People magazine in 1991.

What Madonna does remember was talking to Trump on the phone in Florida, while she was staying at his house for a photo shooting.

‘I did a Versace campaign with Steven Meisel at his house in Palm Beach,’ the Like A Prayer singer said.

She also says that Trump has ‘a weak character,’ but that this shouldn’t come as surprise for an alpha male.

The artist also took time to slam another powerful man, movie mogul Harvey Weinstein, the central figure in the sexual assault scandal that took Hollywood by storm at the end of 2017.

Madonna and Weinstein had met several times when his studio Miramax produced her 1991 cinéma vérité Truth Or Dare.

‘Harvey crossed lines and boundaries and was incredibly sexually flirtatious and forward with me when we were working together; he was married at the time, and I certainly wasn’t interested,’ she said.

She furthermore added: ‘I was aware that he did the same with a lot of other women that I knew in the business. And we were all, “Harvey gets to do that because he’s got so much power and he’s so successful and his movies do so well and everybody wants to work with him, so you have to put up with it.” So that was it. So when it happened, I was really like, “Finally.”‘

Madonna also said: ‘I wasn’t cheering from the rafters because I’m never going to cheer for someone’s demise. I don’t think that’s good karma anyway. But it was good that somebody who had been abusing his power for so many years was called out and held accountable.’

Set to drop on 14 June, Madonna’s fourteenth studio album Madame X will be different from anything she has ever done before.

Influenced creatively by living in Lisbon, Portugal over the past several years, Madame X will contain 15 tracks celebrating Madonna’s career-long affair with Latin music and culture.

But it won’t be shy of other global influences. Madonna will showcase her singing skills alongside her language skills by speaking in Portuguese, Spanish and English.

And she will go political, too. Madonna will be exploring her anger and taking aim at world leaders like Trump ‘who seemed to be systematically removing all of our personal freedoms,’ she also explained in her NYT interview.