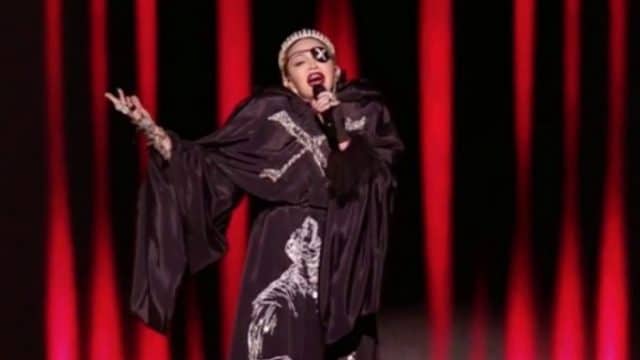 At yesterday’s Eurovision Song Contest Grand final in Tel Aviv, Israel, Madonna surprised viewers with a brief call for unity between Isreal and Palestine during the climax of her new song, “Future” — a call for unity which caught contest organizers and broadcasters by surprise.

The Guardian says that as she and her guest star Quavo sang, “Not everyone is coming to the future / Not everyone is learning from the past,” two of her dancers – one wearing a costume with a Palestinian flag on its back and the other wearing a costume with an Israeli flag on its back – embraced before climbing a set of stairs.

In the live broadcast of the Eurovision Song Contest Grand Final, two of Madonna’s dancers briefly displayed the Israeli and Palestinian flags on the back of their outfits. This element of the performance was not parr of the rehearsals which had been cleared with the EBU and the Host Broadcaster, KAN. The Eurovision Song Contest is a non-political event and Madonna had been made aware of this.

Here’s a brief video of Madonna’s political display during Eurovision.