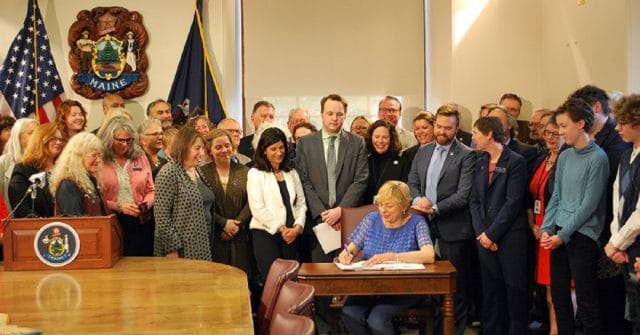 Maine has become the 17th US state to enact a ban on gay cure therapy.

The state’s new Democratic governor Janet Mills signed a bill on Wednesday (May 29) to outlaw conversion therapy for minors, after it passed through the state legislature.

As she signed the bill, Mills said: “Conversion therapy is a harmful, widely-discredited practice that has no place in Maine.

“By signing this bill into law today, we send an unequivocal message to young LGBTQ people in Maine and across the country: we stand with you, we support you, and we will always defend your right to be who you are.”

The decision marks a rapid shift from the policy of Republican ex-governor Paul LePage, who vetoed a near-identical bill one year ago, sparking anger from LGBT+ campaigners.

LePage had claimed that parents “have the right” to seek conversion therapy for their children, and described the bill as “a threat to an individual’s religious liberty.”

However, after his exit from office the bill to outlaw the practice passed with bipartisan support.

Assistant House Majority Leader Ryan Fecteau said: “The legislature and Gov. Mills are sending a clear and concise message to our LGBTQ young people: You matter. You belong. And you are loved for who you are.

“So-called conversion therapy is irresponsible and harmful. I am so proud that Maine is standing tall to affirm that no young person needs to ‘fix’ what is not broken.”

Maine becomes 17th US state to ban gay cure therapyr of EqualityMaine added: “With this signature, Maine has become a safer and more welcoming place for LGBTQ youth, who will never again need fear being sent to a licensed professional for the dangerous and discredited practice of conversion therapy.

“We are grateful that Governor Mills, along with legislators in the House and Senate on both sides of the aisle, were able to come together to act to protect Maine’s youth.”

“We will continue to push each and every day to insure that every state in the country follows Maine’s example and ends this cruel practice once and for all.”

— Sam Brinton of The Trevor Project

“After the disappointment of last year’s veto, they came back stronger and passed legislation to protect LGBTQ youth from the dangers of conversion therapy.

“We will continue to push each and every day to insure that every state in the country follows Maine’s example and ends this cruel practice once and for all.”

A bill banning the practice is also set to be signed into law by Colorado’s out governor Jared Polis on May 31.