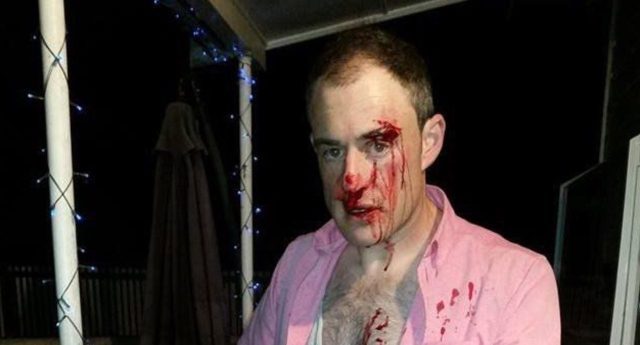 A man was attacked on his way home because he was wearing a pink shirt.

Kent Morgan was walking past an alleyway after finishing his shift at a local bar in New Zealand when two men appeared and called him a ‘pink shirt wearing homo.’ Morgan ignored the two men, but they continued to harass him over his clothing, before attacking him.

“I just carried on walking because I thought there’s no point answering back because it sounded like they’d had a few beers.”

“But they seemingly wanted a blue because they yelled out, “Don’t f*****g ignore me mate”, but I did and just carried on walking.”

Morgan said he heard footsteps from behind him, at which point he knew he was going to be attacked, and was hit by one of the men.

“One guy had me in a body hold and the other guy was hitting me in the eye, but I managed to turn myself to the side and slip out of the hold and wiggle my way free.”

The 32-year-old managed to escape his attackers grip and began to fight back.

“I hit the guy in front of me three or four times and then the one behind me was still holding onto me, so I grabbed him by the ears and bit into his cheek. He squealed and just ran off, but they kept yelling at me about my pink shirt.”

Morgan was shocked by the anti-LGBT motive for the attack, but is now on the mend.

“I’ve got no issues with homosexuals and I’ve got mates who are gay, so it’s clearly a blight in the way these guys have been brought up.”

“Maybe my pink shirt was just an excuse to find a scrap, I don’t know, but I’m disappointed because pink’s my favourite colour.”

“I had to throw that shirt out, but I’m definitely not going to stop wearing pink because of these guys – I wasn’t too impressed.”