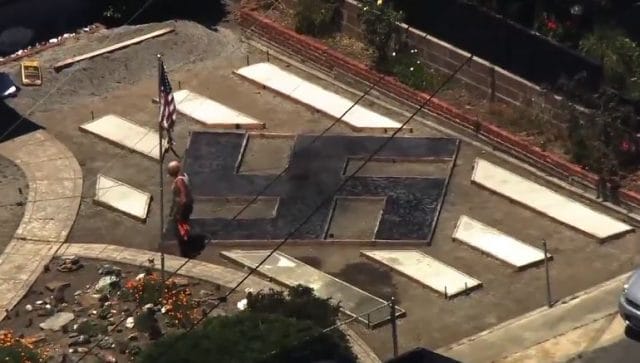 A California man who constructed a giant concrete swastika in his front yard is telling his shocked neighbors to “get over it.”

Johnson told The Mercury News that he has no idea why his neighbors are upset by the construction that he refused to classify as a swastika.

He instead labeled it a “design” and “Tibetan symbol.”

“That Nazi (stuff) happened like 80 years ago,” Johnson told the news outlet on Wednesday. “Get over it, I guess.”

“I like swastikas,” he said. “I think they look cool. … I didn’t do it to get attention. I’m not a worshiper of Nazis. I just thought it’d be a cool thing to put in there.”

Johnson said to him, the image symbolizes “peace, tranquility and harmony.”

The Hill notes that Johnson’s concrete structure, much “like the image used by Nazis during World War II, tilts right, setting the Swastika apart from symbols used in Eastern religions, which face counterclockwise.”

“Personally, and professionally, I find it deeply deeply offensive,” said Nancy Appel, a spokeswoman for the Anti-Defamation League (ADL). “The thing is huge, it’s in concrete and symmetrical. It appears that a lot of effort went into it.”

Johnson said he will not take down the swastika.

“I don’t feel bad about putting it in,” he said. “I feel bad about everybody making such a big deal about it. It’s what America stands for. It’s my property, my choice. A few people don’t like it and now I have to remove it? I enjoy it.”

A landscaping design in the East Bay has neighbors in an uproar as an El Sobrante man carves what appears to be a massive swastika into his front yard. https://t.co/FlQ77ZtJh5 pic.twitter.com/F32N30rs81