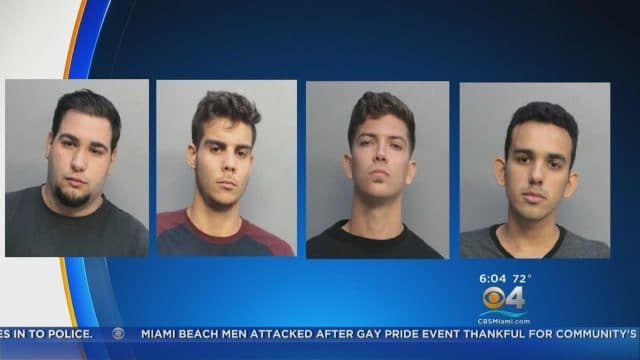 In April, a gay couple got beaten for holding hands outside a public restroom after Miami Beach Gay Pride by four young men shouting anti-gay slurs. Now one of the attacker’s father is saying that his son couldn’t have committed commit a hate crime because he grew up with gay dads.

Juan Lopez said that he raised his son, Juan Carlos Lopez, with his partner of 15 years.

“I’m sure 100 percent” that his son and his friends wouldn’t attack anyone for being gay, he said.

He added that his son “loves LGBT.”

Juan Carlos Lopez, Adonis Diaz, Pablo Romo-Figueroa, and Luis Alonso-Piovet all turned themselves in after surveillance video of the brutal beating was released.

They were charged with three counts aggravated battery for beating Rene Chalarca and Dimitri Lugonov and bystander Helmut Muller, who tried to help the victims.

They could face 15 years in prison on each of those charges, and the maximum sentences for beating Chalarca and Lugonov could be doubled if the jury agrees that this was a hate crime, for a total of 75 years in prison.

The victims believe that they were attacked because of “the way that we were dressed” and how they looked like they “were together.” The attackers shouted “maricones,” an anti-gay slur in Spanish.

But Lopez insists that his son and his friends couldn’t have been motivated by hate. “He respects everybody in this community.”

“These kids grew up with their friend Juan,” the lawyer said. “The father has been in a gay relationship for the last 15 years.”

Chalarca said in May that he was still in pain from the attack and that he lost his job because he was unable to work. He says the attackers “destroyed my life.”