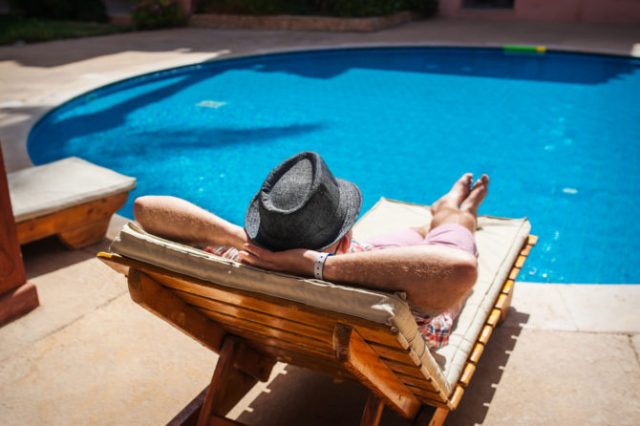 A man is suing the Ritz-Carlton in downtown Los Angeles after he says homophobic abuse at the hands of a hotel pool employee caused his blood pressure to skyrocket and his kidneys to flare up.

The alleged incident happened in July 2017. Angel De Los Santos says he and his boyfriend were minding their own business while relaxing by the pool when an employee approached to say “you don’t belong here” and questioned how they could afford a room at the luxury hotel.

At a press conference this week, De Los Santos said: “She said ‘you cannot be doing that’ here. We’re not doing any sex, kissing, just talking closer like a normal gay couple.”

De Los Santos says the employee also insulted their clothing and accused them of entering the hotel illegally. When they went to the hotel manager, they claim he “turned a blind eye to the mistreatment.”

De Los Santos is now suing the hotel for discrimination, saying the employees’ behavior left him feeling humiliated and aggravated his kidneys.

The civil suit filed in Los Angeles Superior Court alleges discriminatory violations by the Ritz-Carlton of the Unruh Civil Rights Act, intentional infliction of emotional distress, and negligence in the hiring and supervision of its staff members. The lawsuit claims the humiliating experience exacerbated the pre-existing medical conditions of Angel De Los Santos, which includes the need for weekly dialysis for kidney failure, and high blood pressure.

The Ritz-Carlton Hotel Company is a subsidiary of Marriott International, which has a long history of being LGBTQ-friendly.

In 2010, the company launched ONE Marriott to promote diversity in business and inclusivity among its team members and business partners.

In 2014, the company announced its ongoing #LoveTravels program, promising that at their hotels “there is no room for inequality. We believe that every guest, whoever they are, wherever they go, should feel comfortable and welcome the moment they walk through our doors.”

And in 2016, Marriott was named a “Best Place to Work for LGBT Equality,” after earning a perfect score on the HRC’s 2016 Corporate Equality Index.

De Los Santos’ lawyer credits the #MeToo movement for giving his client the courage to speak out, saying he hopes to stop any kind of harassment from happening anywhere else.

Neither the Ritz-Carlton nor the Marriott have commented on the lawsuit.