The judge described the gesture as “unwise.”

A man convicted of killing a middle-aged gay couple in Florida showed his lack of remorse by flipping their loved ones the finger in open court.

In November, Peter Avsenew was convicted of the 2010 murders of Kevin Mark Powell and Stephen Adams, a gay couple he had met on Craigslist. After getting invited into their home in LGBT-friendly Wilton Manors, Florida, the 32-year-old escort killed both men, then stole their cash, car and credit cards.

Against advice from Judge Ilona Holmes, Avsenew opted to defend himself at trial.

#RIGHT #NOW Peter Avsenew, 33, is delivering closing statements in the sentencing phase of his death penalty murder trial. Avsenew is representing himself. Judge asked one final time if he wanted an attorney and he said no. pic.twitter.com/cg8mX378AM

At sentencing earlier this month, a jury in Broward County deliberated whether to hand Avsenew the death penalty or life in prison. But he made it clear he felt neither remorse for his actions nor any desire to plead for his life. In fact, during closing statements, he dispassionately claimed, “My job here is simple. I don’t have to prove anything to you as clearly the state’s proven. All I have to do is be here and behave. It’s up to you to decide life or death based on the information provided to you throughout this entire trial.”

“I have no regrets in my life and I am proud of the decisions I’ve made,” added Avsenew, who claimed he found the couple dead and didn’t call police because he was escort. “No one really knows what happened that day. Everyone can speculate what ifs and maybes until they’re blue in the face, which they’ll never really know.”

After just two hours, the jury unanimously voted for the death penalty. Shortly after receiving the news, Avsenew scratched his forehead with his middle finger. Called out for the gesture, Avsenew insisted, “It wasn’t to the jury—it was to the family.”

“In my heart of hearts, I knew that he was making that gesture to us,” Marci Craig, Adams sister, told ABC News 10. “And then he admitted that he made the gesture to our family.” Adams other sister, Missy Badget, added that after that, “I’m happy that he’s being put to the death penalty.”

Judge Holmes described the gesture as “unwise,” since Avsenew had not been formally sentenced. While a jury can recommend the death penalty, a judge must technically order the punishment.

Avsenew has since hired an attorney, who is expected to present additional evidence not introduced at trial. Avsenew is due back in court on January 26.

Adams, a registered nurse, and Powell, an interior decorator, had just moved to Wilton Manors earlier in the year from Hollywood, Florida, where Avsenew lived. The couple met 30 years earlier at Cleveland Pride. “They fell in love, and have been together ever since,” Powell’s brother, Shannon Kicklighter, told the Miami Herald. 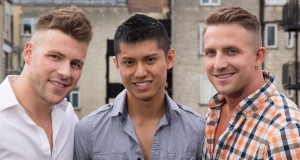 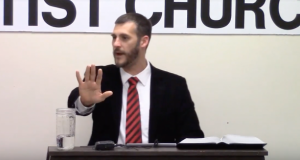