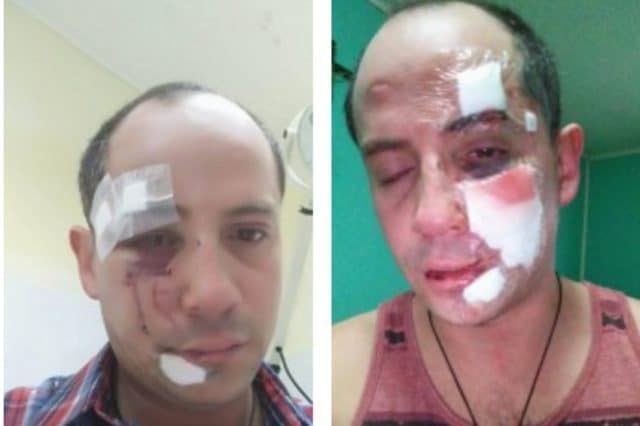 Diaz Bravo was attacked with a broken glass to the face

A Chilean events host was savagely assaulted with a broken glass at a pub during a homophobic attack.

Patricio Díaz Bravo was allegedly attacked on Sunday by a woman who had been shouting homophobic insults at him.

He was attacked at a pub in Puerto Natales in the southern Patagonian region of Chile.

LGBTI organization, Movilh, reported that Yerka Torres Ojeda was hurling slurs such as, ‘colipato’ and ‘maricon’, Spanish colloquialisms for ‘faggot’.

‘I ran out of the place,’ Díaz Bravo told Movilh.

‘I wasn’t able to do much else because the blood was pouring from my face and I had to find a way to fix what happened to me.’

He went straight to the police to report the crime and from there was taken to the local hospital where he received 15 stitches in his face.

Movilh was quick to denounce the violent attack. The organizaton declared its full support for Díaz Bravo and has contacted the Interior Minsitry to help organize legal and psychological help for him.

‘We hope the justice is served and the attacker get the maximum sentence possible,’ it said on its webiste.

The attack on Díaz Bravo came just days after moves were made to legalize same-sex marriage in Chile.

On August 29, Chilean president Michelle Bachelet sent legislation to congress to legalize equal marriage. The outcome might not be decided during her term which ends in March next year.

But advocates are still celebrating the move as a massive achievement.