Home Gay Life Man ‘glassed in the face’ for holding his boyfriend’s hand in London... 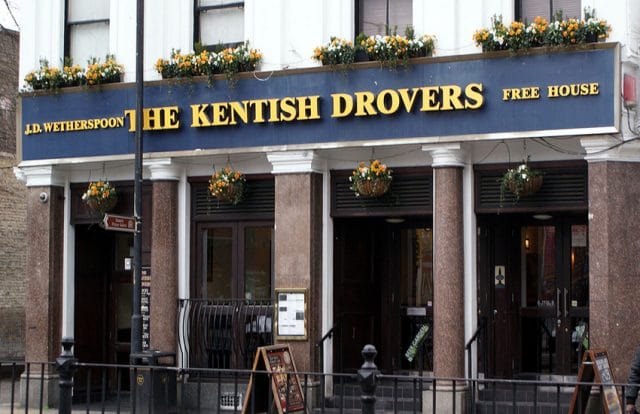 A 23-year-old Londoner had a glass smashed in his face for holding hands with his boyfriend in a Wetherspoon pub.

The unnamed victim was attacked at the Kentish Drovers pub in Peckham on Sunday evening, according to police.

A witness said the gay couple were holding hands when the attacker became aggressive.

The attacker then approached the two men, smashing a glass into the victim’s face.

Police raced to the scene after being called to an assault at the pub at around 10.30pm.

The witness told the Standard the suspect ‘fled’ when officers arrived at the venue.

A Met Police spokesman said: ‘Police are investigating an assault on a 23-year-old man at a pub in Peckham High Street.

‘Officers and the London Ambulance Service were called on Sunday, March 5 at around 10.30pm to the venue.

‘The victim was taken to an central London hospital for treatment for facial injuries after being assaulted with a glass.

‘There have been no arrests and enquiries continue. The incident is being treated as a homophobic hate crime.’

A Wetherspoon spokesman said: ‘This was an unprovoked horrendous attack on a customer at the pub.

‘The victim went to hospital for treatment following the attack and we wish him a speedy recovery.

‘Staff at the pub have reviewed the CCTV and identified the assailant and have passed on the information to the police.

‘We will continue to assist the police in any way possible.’

Anyone with information is asked to call police on 101 or Crimestoppers anonymously 0800 555 111.