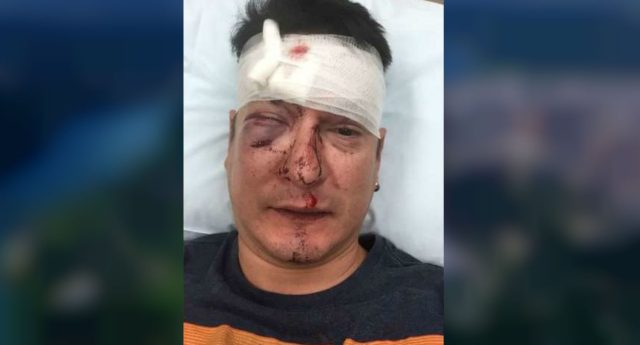 A man who says he was beaten up for being gay has shared a image of his injuries.

Gay Saskatoon resident Eugene Grosh recounted details of the horrific incident, which happened in the early hours of Saturday morning at a local bar.

Mr Grosh said he had gone out with a group of female friends, and had been dancing before going to use the bathroom.

He said “hi” to a man inside the bathroom, who accused Mr Grosh of trying to flirt with him.

The assailant hit Mr Grosh several times in the face before fleeing.

Mr Grosh recalled to the Saskatoon Star-Phoenix: “I walk into the bathroom and come out looking like this.” The party-goer was rescued by his husband, who came to pick him up as he was attempting to walk home.

The pair sought medical attention, and Mr Grosh was diagnosed “with a concussion and severe bruising and cuts to his head and face”, according to the outlet.

Describing it as a “minor setback”, he added: “Saskatoon is a welcoming place. I’m proud to live here, but the hate still exists.”

The 35-year-old told the newspaper he has been attacked several times before and after moving to Saskatoon, adding: “It’s not the first time. It takes a lot to break me.”