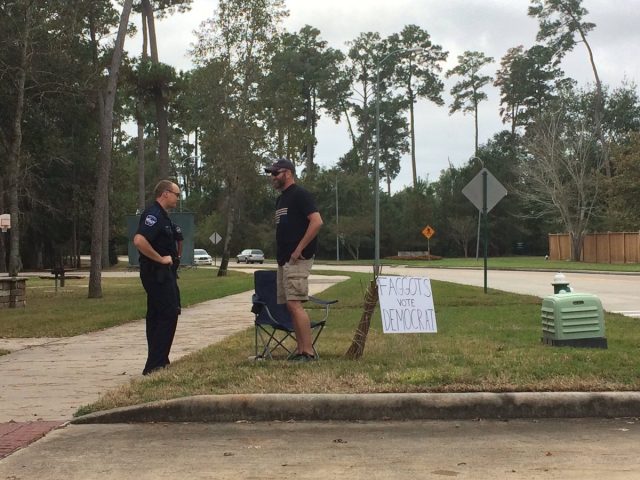 A man with a “Faggots Vote Democrat” sign and a Glock handgun was detained by police outside a polling place in Spring, Texas — near Houston — on Tuesday.

Guns are prohibited at polling places in Texas, but The Houston Chronicle‘s Andrew Kragie reported on Twitter that police didn’t initially intervene because the man was more than 100 feet away as required by law.

However, police apparently handcuffed the man and confiscated his handgun after he moved closer to the polling location, according to Kragie. It’s unclear whether he was arrested.

One anti-Democrat activist carrying a visible hand-gun stood next to an insulting sign was questioned by police around 1 p.m. No details were immediately available.

Meanwhile, another man dressed in a Make America Great hat, a Trump mask and an old-school rocker danced around the polling place.

This guy says he has a Glock on his hip https://t.co/POyimIkjvm

UPDATE. The man in questions has been released and not charged according to police.