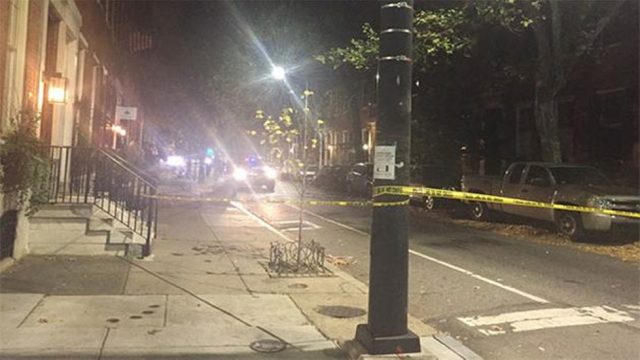 A mail package a Philadelphia man thought was asthma medication exploded and caused injuries to his face, chest, and hands.

Police are investigating the incident as a possible hate crime because the 60-year-old victim has a rainbow ‘Love Trumps Hate’ sign in his front window, according to Philly.com.

A neighbor and a law enforcement source identify the victim as Jim Alden who is recovering after surgery at Jefferson University Hospital.

He opened the package in his kitchen at around 4 am early Tuesday (22 November).

Another man inside the ground floor apartment was not injured.
Police Commissioner Richard Ross said Alden appeared to have been the intended target.

It’s not clear if package, which was addressed to Alden, was placed in his mailbox or actually mailed.

At a news conference Tuesday afternoon, Bureau of Alcohol, Tobacco, Firearms and Explosives Special Agent in Charge Sam Rabadi told reporters: ‘This is not something we see every day in our city here. So I assure you, no expense will be spared and we will use every available resource to try to identify the person responsible for this violent crime.’

More investigators&explosives agents arrive as police now believe this was NOT an accidental explosion @FOX29philly pic.twitter.com/DlMfNt5Mf3

UPDATE: Investigators now believe this incident was not a hate crime and may have instead been related to a domestic dispute.