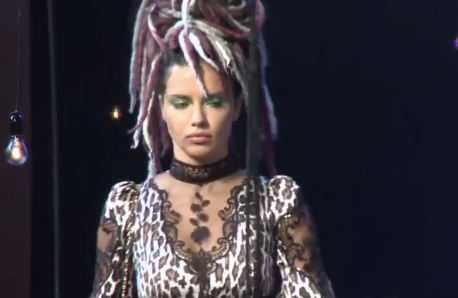 Each season, Marc Jacobs closes New York fashion week and always manages to cause a scene. But for his spring/summer 2017 show on Thursday, he caused a scandal by decking out his predominantly white models in rainbow-dyed dreadlocks.

You ain't shit Marc Jacobs, never been shit. I ain't forget about your foundation bullshit too. https://t.co/81xgEEcigx

We're supposed shut up and sit down cause Marc Jacobs only included 1 black model. You done lost your rabbit ass mind.

Who's in charge of Dr.Seuss's "The Grinch" as of now because marc jacobs slaughtered mad grinch fingers for his fashion show props hairstyle

Marc Jacobs took to Instagram to comment on the controversy, and ill-advisedly used the “I don’t see color or race” line:

“TO ALL WHO CRY ‘CULTURAL APPROPRIATION’ OR WHATEVER NONSENSE ABOUT ANY RACE OR SKIN COLOR WEARING THEIR HAIR IN ANY PARTICULAR STYLE OR MANNER- FUNNY HOW YOU DON’T CRITICIZE WOMEN OF COLOR FOR STRAIGHTENING THEIR HAIR. I RESPECT AND AM INSPIRED BY PEOPLE AND HOW THEY LOOK. I DON’T SEE COLOR OR RACE- I SEE PEOPLE. I’M SORRY TO READ THAT SO MANY PEOPLE ARE SO NARROW MINDED… LOVE IS THE ANSWER. APPRECIATION OF ALL AND INSPIRATION FROM ANYWHERE IS A BEAUTIFUL THING. THINK ABOUT IT”

Prior to the show, several people predicted this outcome:

*sits back and waits for my timeline to fall apart once they see Marc Jacobs is featuring a dreadlock only runway. pic.twitter.com/GvuQBu3fFb