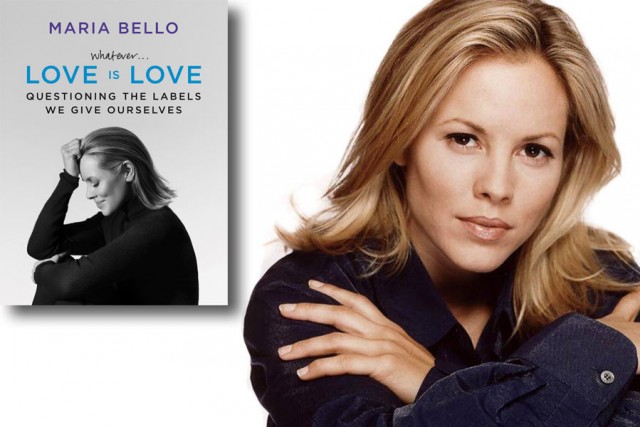 Maria Bello has had an interesting acting career, moving easily from sex symbol to respected dramatic roles. However, she’s also known for her humanitarian work and, increasingly, her writing. Earlier in 2015 she released a book called “Whatever… Love is Love: Questioning the Labels We Give Ourselves.” The book is effectively a follow up to an essay she wrote for the New York Times called ‘Coming Out as a Modern Family’. As out.com put it, “The title [of the book] is a direct quote from Jackson (Maria’s son)—his response, two years ago, when Bello first told him about her relationship with Clare, and it’s what inspired her preferred label in regard to sexual orientation: a “whatever.””

That desire to define herself without labels is inspired by her appreciation of the fact that children who are unencumbered with an adult’s perspective of the world tend to see things more philosophically.

Bello says: ““Jackson woke me up, literally and metaphorically, with his statement. Our conversation opened up a door that not only led me to be brave enough to admit my truth to him, but also proclaim it to others in a very public way.” And she has proclaimed it publicly, eliciting an unexpected response from readers and fans. Many people have been vocal in their shared experience, leading Bello to realise that there is a world of ‘modern families’ out there. Being a “whatever” has allowed people who are in queer relationships to remain involved at some level with their heterosexuals exes, meaning that the whole extended family remains strong.

This active participation in the queer community since she came out reflects Bello’s ongoing humanitarian work. In 2010 she founded an organisation called WE ADVANCE. Following the Haiti earthquake of that year, the organisation works with Haitian women, helping them with healthcare and overcoming domestic violence. She’s also a member of the board of Darfur Women Action Group, an NGO that helps victims of the genocide in Darfur.

With her work with women’s groups, it comes as no surprise that she is a proud feminist too. Filling her life with activism seems to have freed Bello to be more relaxed about her relationship with others, and the labels we use to describe ourselves. It’s refreshing to hear a Hollywood star not only coming out but offering food for thought too. She says: “I’m definitely a feminist. I call myself a Catholic even though I don’t believe in everything. And I’m a whatever, but I’m proud to say that I’m gay, bi, lesbian, whatever you want. I’ll take it all.”

That “taking it all” is a proud, forthright stance in a climate where many actors still wrestle with the notion of coming out as anything, let alone whatever. It marks her out as something of a trailblazer, and it’s easy to see why her essays and book, and Bello herself, have been taken to heart by so many.