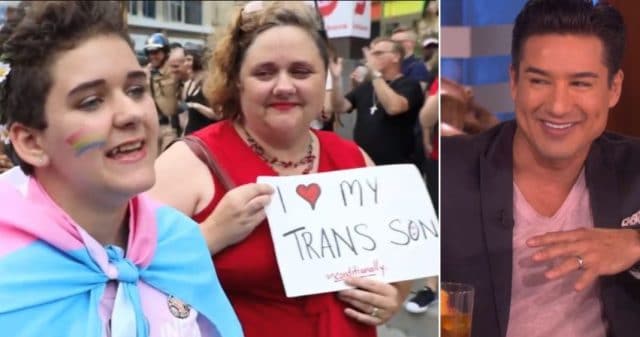 Actor and television personality Mario Lopez is facing backlash for claiming it’s “dangerous” for parents to support children who identify as transgender.

Lopez, a father of three and co-host of the entertainment news program “Extra”, shared his opinions during a June interview on The Candace Owens Show, a PragerU video series hosted by the 30-year-old right-wing figure, but the clips have only recently attracted attention on social media.

During the 40-minute interview, Owens noted that Lopez’s son has “boyish” interests, and that it struck her as “a weird trend” that some celebrities, like Charlize Theron, are allowing their children to choose their gender identity.

In April, the actress revealed that her 7-year-old child Jackson did not identify as a boy.

Owens told the new Access Hollywood host, “A lot of weird trends come out of Hollywood and one of the weirder ones, for me, is this new trend where celebrities are coming out — and I know Charlize Theron did this a few weeks ago — is saying that their child is picking their gender. And this is strange to me, and they say, ‘Oh, I looked at my child and my child was swimming in a bathtub and looked up and said, “Mommy, I’m a boy’” and that’s weird …”

Owens said that as a former nanny, she believes children do not possess the “mental authority” to express a gender identity different than the one they were assigned at birth and compared children claiming transgender identity to them pretending to be a superhero or a mermaid, a childhood act of make-believe.

“I am trying to understand this new Hollywood mentality where they just think their children now have the mental authority,” she said.

“I am trying to understand it myself, and please don’t lump me into that whole [group],” Lopez responded. “I’m kind of blown away too. Look, I’m never one to tell anyone how to parent their kids obviously and I think if you come from a place of love, you really can’t go wrong but at the same time, my God, if you’re 3 years old and you’re saying you’re feeling a certain way or you think you’re a boy or a girl or whatever the case may be, I just think it’s dangerous as a parent to make this determination then, well, OK, then you’re going to a boy or a girl, whatever the case may be … It’s sort of alarming and my gosh, I just think about the repercussions later on.”

“When you’re a kid … you don’t know anything about sexuality yet. You’re just a kid,” he added.

After Owens claimed that parents who support their children in this way are narcissists showing off their tolerance, Lopez responded, “I think parents need to allow their kids to be kids but at the same time, you gotta be the adult in the situation. Pause with that and — I think the formative years is when you start having those discussions and really start making these declarations,” he said, adding air quotes.

“Some children who explore non-stereotypical forms of gender expression are transgender, however others just want a flexible gender expression,” Christia Brown, PhD., a social psychology professor at the University of Kentucky and the author of Parenting Beyond Pink & Blue, told Yahoo Lifestyle. “Kids are drawn to what they find aesthetically pleasing and there’s often not deeper meaning.”

“Dangerous” for these children, says Brown, is expecting them to look and act in a way that doesn’t feel natural to them. And conflating sexuality, as Lopez said, with gender expression deepens the confusion.

“Many transgender people get frustrated when they’re lumped under the LGBT umbrella because for them, their identity is not about sexual orientation,” Brown tells Yahoo Lifestyle.

Later, Lopez called movements such as #BelieveWomen in support of sexual assault survivors a “dangerous hashtag because people lie and sometimes those people are women.”

“God forbid you have a son out there and a girl may have felt a certain way about a situation — dismissed, hurt, whatever, and is feeling vengeful and just decides to tell a certain story that’s not even exactly true, come back and hurt that individual,” he said.

Lopez said that to take women at their word is “incredibly dangerous.”

In a statement to PEOPLE on Wednesday, Lopez apologized for his remarks.

“The comments I made were ignorant and insensitive, and I now have a deeper understanding of how hurtful they were,” he said. “I have been and always will be an ardent supporter of the LGBTQ community, and I am going to use this opportunity to better educate myself. Moving forward I will be more informed and thoughtful.”