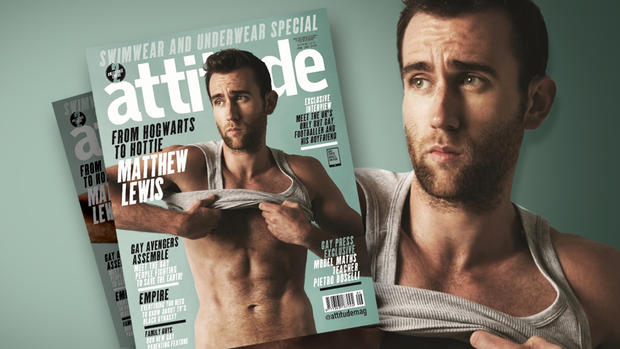 Who’d have thought it, eh? Neville Longbottom, put-upon supporting character in the ‘Harry Potter’ franchise growing up to become a chiselled, smoking hot actor and cover star? Well, he did have that punch-the-air moment in the final movie… Matthew Lewis is one of those child stars who caused jaws to hit the floor when we saw him all grown up. Images from him starring in ‘Bluestone 42’ set the internet alight, and when he went on to do a cover shoot for Attitude magazine he set many hearts (and groins) aflame too. He’s since gone on to start in ‘Me Before You’ where he played a triathlete and personal trainer, which required him to get into more training. As a test of his own commitment, he decided to follow the same strict diet and regime as his character would follow, and this meant “just eating salads all the time” and coming off sugar and alcohol. While his personal commitment to the role is admirable, it also had the added benefit of preparing him for his underwear shoot for Attitude.

However, his new found fame as a bit of a sex-god comes as a surprise to Lewis, who seems to retain his humility in the face of all the attention.

When he was talking about appearing at the premiere of the last Harry Potter movie, without the fat suit, he says he was glad to be able to be himself, but “obviously a lot of attention focused on it, which I didn’t expect at all. I’ve never considered myself to be good-looking at all. Just average.”

That humility might just win him even more fans – it’s refreshing to see a star in the making with that kind of down-to-earth, ahem, ‘attitude’.

One person who may not be a fan of his new found expression of himself as a half-nude cover star though may be J. K. Rowling, the woman who wrote the Harry Potter books and is effectively responsible for his fame. She took to Twitter, tongue firmly in cheek, to say: “Not as bad as watching Dan in Equus, but close. Warn me next time, for God’s sake. ”

It seems she still mothers those kids in a way, and Lewis hastily sent a chastened reply, saying “Well, this is awkward. Sorry, Jo…”

Her quick-fire response was that she’d always support him but he should go and put some clothes on. Is it possible that having J. K. Rowling following you on social media is even worse than your actual mother?

Regardless, we’re sure that Lewis wants to be considered a serious actor now, so enjoy those sexy photoshoots while you can – it may be a while before this unassuming star does another one!